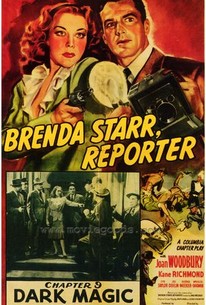 Based on the popular comic strip by Dale Messick, this Sam Katzman-produced Columbia serial starred the beautiful and talented Joan Woodbury, an actress who never really lived up to her early potential. Brenda Starr, Reporter didn't exactly change that sad fact; a rather straightforward tale of a girl reporter who is mistakenly believed to possess the key to the whereabouts of a hidden fortune, the serial was a typically shoddy Katzman effort. A gang of crooks headed by the always watchable Wheeler Oakman spend 13 chapters attempting to force the secret out of poor Brenda, who is always saved in the nick of time by handsome Kane Richmond. In the end, Brenda Starr, Reporter had a couple of attractive leads, and a wonderfully hammy master criminal, but very little else.

There are no critic reviews yet for Brenda Starr, Reporter. Keep checking Rotten Tomatoes for updates!

There are no featured reviews for Brenda Starr, Reporter at this time.