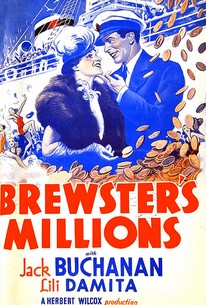 Brewster's Millions was the fourth film version (and first talkie adaptation) of the war-horse Winchell Smith/Byron Ongley play. This being a British film, it's only logical that popular British musical comedy star Jack Buchanan should portray hero Jack Brewster. Once more, Brewster will inherit his uncle's huge estate only if he's able to spend one million pounds within two months. Our hero invests in several "lost cause" stocks and businesses, only to suffer as each one of his investments makes money. A last-act surprise enables Brewster to come out on top--and to claim as his bride the lovely Nancy O'Neil, who would love him even if he were broke. Brewster's Millions would be remade three more times over the next five decades. ~ Hal Erickson, Rovi

Allan Aynesworth
as Rawles the Butler

Lawrence Hanray
as Grant a Solicitor

Anthony Holles
as Ferago the Mayor

Ian MacLean
as McLeod
View All

There are no critic reviews yet for Brewster's Millions. Keep checking Rotten Tomatoes for updates!

There are no featured reviews for Brewster's Millions at this time.