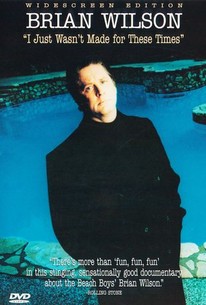 The odd genius of Beach Boys leader Brian Wilson is profiled in the black and white documentary. Much of the film, done by famed musician and record producer Don Was, closely examines the innovation inherent in Wilson's songs. It also examines the ways in which his life experiences influence his music. Wilson's mental illness, legal struggles, and rivalries are not covered in depth. However interviews with his daughters, and ex-wife are included along with many musical clips.

Carl Wilson
as Himself

Wendy Dawn Wilson
as Herself

Brian Wilson
as Himself

There are no critic reviews yet for Brian Wilson. Keep checking Rotten Tomatoes for updates!

There are no featured audience reviews yet. Click the link below to see what others say about Brian Wilson!