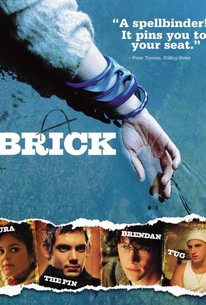 Critics Consensus: This entertaining homage to noirs past has been slickly and compellingly updated to a contemporary high school setting.

Critics Consensus: This entertaining homage to noirs past has been slickly and compellingly updated to a contemporary high school setting.

Critic Consensus: This entertaining homage to noirs past has been slickly and compellingly updated to a contemporary high school setting.

"Brick," while taking its cues and its verbal style from the novels of Dashiell Hammett, also honors the rich cinematic tradition of the hard-boiled noir mystery, here wittily and bracingly immersed in fresh territory - a modern-day Southern California neighborhood and high school. There, student Brendan Frye's piercing intelligence spares no one. Brendan is not afraid to back up his words with actions, and knows all the angles; yet he prefers to stay an outsider, and does - until the day that his ex-girlfriend, Emily reaches out to him unexpectedly and then vanishes. Brendan's feelings for her still run deep; so much so, that he becomes consumed with finding his troubled inamorata. To find her, Brendan enlists the aid of his only true peer, The Brain, while keeping the assistant vice principal only occasionally informed of what quickly becomes a dangerous investigation. Brendan's single-minded unearthing of students' secrets thrusts him headlong into the colliding social orbits of rich-girl sophisticate Laura, intimidating Tugger, substance-abusing Dode, seductive Kara, jock Brad and - most ominously - non-student The Pin. It is only by gaining acceptance into The Pin's closely guarded inner circle of crime and punishment that Brendan will be able to uncover hard truths about himself, Emily and the suspects that he is getting closer to.

Lukas Haas
as The Pin

Matt O'Leary
as The Brain

Cody Lightning
as The Lug

McJoel Hamilton
as The Pin's Driver
View All

Brick is quotable, clever and cryptic...

The teens in Rian Johnson's striking debut feature Brick express themselves in jargon that sounds as if lifted straight from the pages of Dashiell Hammett and Raymond Chandler.

The self-consciously mannered rat-a-tat-tat dialogue also mines a neat overlap between teen slang and noir patois, both of which can be indecipherable to non-initiates.

While Brick is chock-full of the characters, language and imagery of classic noir, it is in fact set among contemporary teenagers. It's a gimmick, but it's a damn fine gimmick.

Even with its shortcomings, Brick provides solid thrills for film noir fans.

Bizarre and ingenious neo-noir from US writer-director Rian Johnson.

Brick is a brilliant, bravura and breathtakingly ingenious debut from writer-director Rian Johnson.

This quirky little film was an audience favorite at Sundance. Fans of teen drama, Heathers division, will enjoy a veteran ensemble: Joseph Gordon-Levitt in his first post-Mysterious Skin appearance, the lovely Lukas Haas...

Rian Johnson boldly decided to mash together a high school flick and a neo-noir, and the result is surprisingly good.

...it's impossible not to wish that the first-time filmmaker hadn't leaned quite so heavily on the antiquated shenanigans.

While some may get more out of it than others, "Brick" is the type of film that you either choose to go along with or you don't. As Brendan discovers his ex-girlfriend has been murdered, he begins to uncover the mystery by working with an underground crew of drug dealers. While you may think all of the answers are given by the end of this film, I surely think the opposite. They try very hard to explain everything through the visuals and through excessive amounts of dialogue, and I think that worked about 75% of the time. Joseph Gordon-Levitt is great as the leading man and director Rian Johnson does a great job for his first ever feature film. With incredibly intriguing cinematography, a great (yet complex) script, and energetic editing, "Brick" is a very solid film. It definitely warrants multiple viewings in order to understand the full message being given. I would highly recommend this movie to film junkies. Other than that, I feel this film will leave too much to be desired. Personally, as a whole, I think this is a great film!

A mystery with nothing to really figure out, ala the all-tell-no-show style of "Tinker, Tailor, Soldier, Spy." The scenes are terribly episodic, and they don't show HOW our hard-boiled Encylopedia Brown solves any of the cryptic clues. The scenes merely jump from Brendan following flimsy lead after flimsy lead, then getting beat up, then calling someone to set up something for some reason, then confronting another someone who was implicated in an earlier scene without revealing his thought process. The script suffocates from too much plot and hardly any connective tissue, and it's all covered up with this overcooked, pseudo-hip noir patois. The characters don't SAY anything; they're just written to sound unique. The big reveal in the end is also anticlimactic. The baby is Tug's and arguably only tangentially related to the drug plot. Emily's first phone call filled with intentionally confusing jargon about "the brick" and "Pin" and "Frisco" is all just a ham-handed inciting incident catalyzing this wild goose chase. The filming is chic and cool with the zooms during the fight scenes and the high class, vaguely "Eyes Wide Shut" high school environment, but the style doesn't atone for the lack of substance.

I know this film is several years old, but it makes me happy to see that we still have films being released once in a while that are unique and original, and not a sequel, remake, or just a rehash of the same old crap. This was my second time seeing a Rian Johnson film, and this is where it's at. I know it came out before The Brothers Bloom, but hey, I can't always get to see a director's films in order. This film is a hard-boiled detective mystery (complete with period slang) which is already cool, but made even cooler by the fact that it is set in contemporary times at an unnamed high school somewhere in California. Awesome. This film isn't merely just a nod to a genre though. It stands on its own and is a very compelling and really well made thriller that, if nothing else, could at least get people interested in the stuff that inspired it. Joseph Gordon-Levitt is at the center of this tale about an everryman thrust into a situation that quickly sees him in over his head and on very unstable ground as he tries to piece together the truth surrounding a phone call that got him in the mess to begin with. The film has a great sense of style, look, and atmosphere. The material, which involves drugs and murder, is suitably grim, but thankfully there's some wry humor sprinkled throughout to take the edge of (slightly). The film seems a bit hard to follow at first, but that's kinda the fun of it. For those who can't keep up though, it all gets answered in the end, so there. This might be a sign that the script could have been better at clarifying things, but I prefer to see it as a way of making the viewer engage with it and think, instead of just sitting there. This is some really good stuff, and I'm glad I finally saw it. You should not hesitate to do the same.

Hard-boiled High. You know the gimmick right? OC kids do Dashell Hammett - the Maltese Falcon played out in a schoolyard. They keep the undecipherable language and the familiar yet byzantine plot but then - they throw out almost everything else you associate with the genre. Whatever, let's do this: OK - I liked the visuals, the music and most of the acting - it really is a very well crafted debut. At the end of the day however, it all results merely in a promising but rather slight exercise in style. The premise is simply impossible to sustain and even if it is, it wasn't.