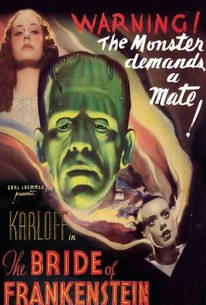 The Bride of Frankenstein Videos

Dr. Frankenstein is forced to tempt fate once again by creating a suitable mate for his monster.

Boris Karloff
as The Monster

Lucien Prival
as Albert, the Butler

Dwight Frye
as Karl, the Hunchback

John George
as Villager
View All

Critic Reviews for The Bride of Frankenstein

Screenwriters Hurlbut & Balderston and Director James Whale have given it the macabre intensity proper to all good horror pieces, but have substituted a queer kind of mechanistic pathos for the sheer evil that was Frankenstein.

Whale's erudite genius brings it all together. He sculpts every nuance of self-parody, social satire, horror, humour, wit and whimsy into a dazzling whole, keeping every one of his fantastical plates spinning until the tragic, inevitable finale.

Karloff manages to invest the character with some subtleties of emotion that are surprisingly real and touching.

Whale added an element of playful sexuality to this version, casting the proceedings in a bizarre visual framework that makes this film a good deal more surreal than the original.

Another astonishing chapter in the career of the Monster.

Whale's most perfectly realised movie, a delight from start to finish.

A masterpiece of classic horror with plenty of queer subtext to boot.

This is an absolutely unforgettable film, a must-see for every gay horror fan.

The chief new element is the monster's bride, played by Elsa Lanchester, who doesn't appear in her entirety until approximately five minutes before the movie ends.

Splendid pictorial composition and dramatic lighting make this a worthy successor to Frankenstein.

It is no surprise that Bride of Frankenstein is heralded as one of Hollywood's best-ever sequels: it does everything a good sequel should.

Whale proves a master of moody thrills, while Boris Karloff is silently expressive as the hulking monster.

Audience Reviews for The Bride of Frankenstein

Whale returns to his Frankenstein with this amusing sequel that has an even campier, deliciously wrier humor and offers more depth to Karloff's Monster, while everything is also more complete here (despite gaps in logic), including a score that was missing in the original movie.

As far as sequels go, "The Bride of Frankenstein" is great, however, I felt like I wanted more of the bride than what was delivered. Instead of having the entire film build to that one climatic moment, it should have happened earlier on and then have added more suspense to whether or not it would work out. I felt a bit let down with this sequel. Boris Karloff actually improves on his acting from the first and makes you feel for him in every moment throughout this film, and I will say that is the one aspect that was done better, emotion. The character of Frankenstein's Monster has much more to do here, but nobody else seems to be as motivated as he does for finding his mate. Overall, it is a great classic film that is definitely rewatchable, but the original is the true marvel. "The Bride of Frankenstein" is great!

Even though 1931's "Frankenstein" was neatly wrapped up at the end, killing off the doctor and his monster, Universal intended to make a sequel to the monsterously successful film (Universal's policy was to use the same crew for the next film, which is why production was delayed four years, waiting for the director to become available again). Director James Whale wasn't crazy about making a sequel, and with "Bride of Frankenstein", he chose to have the monster speak (something Karloff was set against). The film begins with Mary Shelley and Lord Byron discussing the "complete" story of Frankenstein, the one never heard before. Of course the Doctor and the monster survived the fire at the wind mill, and as the doctor rested and recouped, the monster continued to reek havok on the villagers, exacting revenge upon them. That is, until he meets an old blind hermit who takes him in, and teaches him to speak. Doctor Frankenstein, meanwhile, is visited by a Doctor Pretorius, a scientist who, like himself, is in the business of creating life. But whereas Frankenstein does it by piecing together old bodies, Pretorius creates life from scratch (the flaw being that they're little miniature people). Pretorius wants to combine his work with Frankenstein's so that they might create a race of manmade people, and proposes that they work together to create a mate for the creature. The film is a contrivance to be sure, but the uncomfortable creepiness of the monster is still there. In Mary Shelley's book, Frankenstein's monster was literate, capable of thought and feeling but evil because it had been created not by God, but by man and therefore was without a soul. In the film version of Frankenstein, the Creature is a failure of science, an aberration of nature, a sub-human. It's horrific by nature of it's existence. We may feel pity for it, but we cannot suffer it to live. "We belong dead!" screams the monster in it's horror, it's horror of self-awareness. Every fiber of it's being screams out for death, and yet it exists in spite of mother nature and God himself. Even the brief respite bought from friendship and food and wine can't satisfy. For the creature, life is only pain. And yet, it clings to it in spite of itself. It's one of the great mysteries of the monster, of "Frankenstein", and life in general. For some, "life is pain", for the rest, we can only shield ourselves from it's inevitable conclusion.

A sequel to the film "Frankenstein" this film from director James Whale does a much more adequate job of showing the plight of the monster. While the original dealt more with the animation and creation of the monster, and the crazed state of his creator, Dr. Frankenstein, this film deals more with what's happened in the aftermath. The original film showed the monster as a lifeless monstrosity, incapable of connecting with another person in a way that didn't ignite fear, and that was much more about the ugliness and fear brought about from the monster's rampage. This film humanized the monster, gave him the ability to speak, to yearn for another soul that understood him, and/or possibly love him. Painting the now injured and married Dr. Frankenstein as a man coming out of the fog of madness and yet not guilty for his crimes against those in the village, he isn't even prosecuted for his crimes. Instead he heals himself while locked away in his castle with his new wife Elizabeth and all his servants. Blackmailed by a Dr. Pretorius, who has Dr. Frankenstein's wife captive thanks to the muscle of the monster, Frankenstein has to animate a corpse for the monster to have a mate. The monster crawls around the countryside, finds a friend in a blind man, and is hunted by angry villagers. You feel bad for the monster in contrast to the original, mostly because he doesn't kill a little girl on accident. He still kills people, has the emotional and mental maturity of a child, but there's something so hopeless to his anguish. You wonder how he could possibly feel anything whilst being undead and all. Still, the compassion, misanthropic vantage point, and ambitious effects and cinematography make this a classic film on par with the original.

The Bride of Frankenstein Quotes