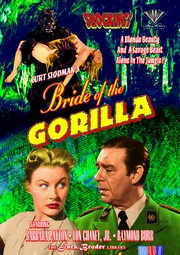 Bride of the Gorilla

Bride of the Gorilla Reviews

Daniel A
April 26, 2015
could have used more Gorilla killing spree but a decent B movie flick for a slow sunday.

Not even Lon can help this one.

Orlok W
½ February 22, 2014
Medieval legend and Heart of Darkness rolled into one Odd, almost surreal, jungle madness--Jungle Justice: Favors None But Equals All!!

Billy S
July 17, 2013
Essentially a werewolf movie but with a gorilla. A moral-play with murder and voodoo, with a very abrupt ending.

Bill T
April 23, 2013
Not as bad as all that. Raymond Burr plays a plantation owner who all of a sudden has a strange attraction to the jungle, much to the chagrin of his new wife. What could be causing it? Though the reasoning is silly, Burr and friends keep this movie going until it's predictably cheesy ending.

Forrest P
March 3, 2013
What's this? I've given Bride Of The Gorilla a passing rating? What is this monstrosity?

The film stars Raymond Burr as an owner of a wealthy plantation out in the jungle who one day kills a rival of his and gets away with it. A mysterious witch who saw the event puts a curse on him that turns him into an ape-like beast at night. The plot from here is relatively similar to The Wolf Man: the guy kills some animals and people at night while the police force (including the very recognizable and distinguished Lon Chaney, Jr.) try to figure out what is going on.

The film also features an interesting little love story between the Raymond Burr character and the wife of the man he killed. This girl is played by Barbara Payton, and she and Burr share some very nice chemistry with each other. Neither of them are brilliant actors, but both of them work well and simply enough off of each other to make the love story work.

It is very important that this love story work, as this is the heart of the film. It shows the price that Burr's character pays in order to get with Payton's character and the way they may not be able to end up together thanks to the curse that has been placed on Burr.

One of the biggest aspects of the film that made it work for me was that the film's horrible gorilla effect was only shown a couple of times. It's almost as though the director (otherwise not distinguished in any way, really) knew that the gorilla looked horrible, and so left a majority of what happens between the gorilla and its victims up to the imagination. This is impressive, and it's a directorial philosophy that would later be adopted to great success by Spielberg twenty-four years in the future.

In addition to all this, there are some nice moments of tension, the cameraman seemed to know what he was doing, and the screenplay was not too bad. The film works simply, and ultimately it pays off. I enjoyed watching the film and I found myself interested in what was going on. This is not a particularly great film, but I was surprised to find it to be one of the few B-list films that actually works.

Anya S
October 26, 2012
Bride of the Gorilla was funnier than scary, I do understand that this movie was made in 1951, but I was not that impressed with the story or the character build up. Most of the time we see the main character Raymond Burr stumbling in and out of the plantation. Throughout the film I was waiting for something great to happen, but I was instead forced to watch one bad 50's horror movie. Don't bother watching this, there are many other 50's horror movies that are much better than this.

Wes S
½ March 21, 2012
Nothing too spectacular. Raymond Burr is ok in this one, but the story isn't too interesting and it ends suddenly with no connection to the wrecked house that appears in the beginning of the film. Overall it's boring with very few good scenes.

Ricky J
½ April 9, 2011
This movie is a complete waste of time.And tyhis is supposed to be a Sci-Fi movie? Really?

Adam R
January 10, 2011
In "Bride of the Gorilla," Lon Chaney Jr. finds himself effectively in the role Claude Rains played 10 years previous in "The Wolf Man;" he is monster-hunter, rather than the monster himself. Also peculiarly, Chaney plays a South American-born police commissioner who is forced to question whether a "civilized" education can help him solve the case of a mysterious, deadly creature wandering his native jungle. Sure, it's a white man playing a South American, but at least Chaney's not wearing... uh.... brown face -- and he's effective in the role.

Indeed, "Bride of the Gorilla" is that rare Hollywood B-picture where native "primitive" beliefs are played straight, rather than as superstitions that take on a life of their own (or worse, for laughs). The characters who believe in the demonic curse that possesses foreign laborer Barney Chavez (Raymond Burr) are not loin-cloth-wearing simpletons; they range from servants to farmers to policemen in the story's narrative, and all are given lines -- accented or not -- filled with dignity and humanity.

The story of "Bride" is ultimately a moral one as well: If a man does bad things, he will be repaid for his acts either by the laws of men, or the inscrutable, unappealable laws of nature, which work in mysterious ways.

James M
July 19, 2010
The manager of a rubber plantation is poisoned by a native woman and turns into a gorilla.

The only surprise is that it wasn't written, directed or produced by Ed Wood.

Super Reviewer
Bruce B
½ February 15, 2010
Not a bad movie for being filmed in 1951. After all it has Raymond Burr (Perry Mason, and Ironside), the beautiful Barbara Payton, and Lon Chaney. It was a change seing Chaney playing the simple part as a Police Commisner. After Burr helps his former Employer die, a jungle witch puts a curse on Burr who at night turns into a gorilla, (Chaney and The Wolfman). Of course in the end the Gorilla is killed but noot with silver bullets. My copy came from the Mill Creek Sci Fi 50 Movie Pack, its also in the Sons of Kong Collection. All in all its a good movie worth 3 3/4 Stars but not 4, so her on Flixster it gets a3 1/2 star rating.

Super Reviewer
Greg S
January 31, 2010
A rubber-plantation manager (an young and surprisingly amoral Raymond Burr) lusts after the wife of his employer: murder, black magic, guilt and a strange creature terrorizing the jungle follow. Given the silly premise and sillier title, this is actually a fairly well-scripted and acted, though cheap, WOLFMAN ripoff that should just hold your attention for it's 66 minute running time. Lon Chaney, Jr. appears as a South American native, but doesn't even attempt a Spanish accent (?)

Super Reviewer
Anthony V
October 22, 2008
A lame rip off of the Wolfman.

Private U
½ May 28, 2008
A boring and stupid 70-minute-long romp that seemed to go one for hours. The gorilla was stupid and not menacing at all. The jungle shots were decent, and the characters were a little interesting, but nothing special with this one.

Joshua G
½ May 11, 2008
A little silly and a weak ending, but still an enjoyable transformation horror. Rent it!
Page 1 of 2