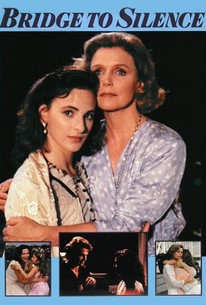 This made-for-TV film represented the first speaking role for hearing-impaired actress Marlee Matlin. A happy wife and mother, Matlin is grief-stricken when her husband is killed in a car accident. Still not fully recovered after several weeks, Matlin must rely on her mother Lee Remick to care for her young daughter. Matlin puts her life back together by joining a theatre troupe comprised of deaf actors, one of whose members is played by Phyllis Frelich, who originated the role in the Broadway version of Children of a Lesser God that Marlee Matlin played in the film version (and won an Academy Award in the process). The film's climax is dictated by Lee Remick's efforts to gain full legal custody of Matlin's daughter. Bridge to Silence was first telecast April 9, 1989.

Critic Reviews for Bridge to Silence

There are no critic reviews yet for Bridge to Silence. Keep checking Rotten Tomatoes for updates!

Audience Reviews for Bridge to Silence

Wonderful performances by a talented cast, including Marlee Matlin in her first speaking role, cannot quite overcome a melodramatic story in which a deaf woman nearly loses custody of her daughter to the mother who never understand her. I always regards the deaf culture for the rights to communicate with hearing people to give great friendships and relationships that can make you understand positively.