Bridget Jones: The Edge of Reason2004 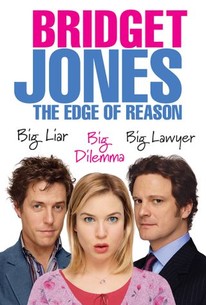 Critics Consensus: Bogged down in slapstick and silliness, Edge of Reason is a predictable continuation of the Bridget Jones story.

Critics Consensus: Bogged down in slapstick and silliness, Edge of Reason is a predictable continuation of the Bridget Jones story.

Critic Consensus: Bogged down in slapstick and silliness, Edge of Reason is a predictable continuation of the Bridget Jones story.

Based on author Helen Fielding's sequel to Bridget Jones's Diary, Bridget Jones: The Edge of Reason picks up four weeks after the original film left off, with Bridget (Renée Zellweger) emotionally satisfied at long last with Mark Darcy (Colin Firth), her barrister boyfriend. Stability in Bridget's life, however, quickly becomes a contradiction in terms. Though Mark is openly supportive of Bridget's eccentricities -- and there are many -- she is nonetheless threatened by Mark's young, nubile intern, not to mention irked at finding out that he is, among other less desirable qualities in her eyes, a conservative voter. Complicating issues further is the reentrance of her ex-lover, Daniel Cleaver (Hugh Grant), whom Jones, perhaps mistakenly, thought she had finally gotten over. Before long, the situation escalates into another series of embarrassing circumstances for Bridget, who is faced once again with a crippling feeling of self-doubt and has only her diary and friends to combat it. ~ Tracie Cooper, Rovi

Alex Fixsen
as Cameraman in Aircraft

David Cann
as Cameraman in Field

Jeremy Paxman
as Himself

Oliver Chris
as Director in Gallery

Christopher Adamson
as Man in Corridor

Richard Braine
as Vicar
View All

News & Interviews for Bridget Jones: The Edge of Reason

View All Bridget Jones: The Edge of Reason News

Critic Reviews for Bridget Jones: The Edge of Reason

What I can't stand about this film is the way it talks down to its audience.

Repeat of first film lacks charm. Not for kids.

A sequel that should have been buried six feet under.

It's testament to Zellweger's likeability and skill that the film is still enjoyable, but it lacks the element of surprise.

The humiliation of Bridget Jones is done so many times that it's not funny and it's not clever and it's not interesting.

I hope the cast - especially Zellweger who apparently has lost and gained more weight in the last three years than Oprah - was well paid, for artistic merit certainly couldn't have been the criteria for taking this one on.

...ultimately falls right in line with its hit-and-miss predecessor...

A calamitous disappointment of a sequel. The old Bridget we all loved for her frailties, failings and feelings is gone.

[T]here are a few moments of freshness in the film (and I do mean few) and thanks solely to the talents of Zellweger do we see even a glimmer of any of the offbeat charms that endeared us to Bridget in the first place.

The new Bridget is bigger, brasher, and nowhere near the kind of thirtysomething girl we singletons and former singletons can relate to.

This film is so appalling that I don't quite know where to begin.

There's a big empty space where the heart of this movie should be.

Audience Reviews for Bridget Jones: The Edge of Reason

While in the first movie Bridget Jones was an adorable character, here she is a neurotic, irritating and selfish caricature that gets herself in only stupid, artificial situations, and even worse than the fact that this film seems like an unfocused collage of sketches is that it is not funny at all.

A comedy that is an exact retread of the original. I don't like movies that backtrack. Here we have Bridget Jones suddenly doubting Darcy's fidelity. This leads to misunderstandings, where she is soon, once again, torn between Darcy and Cleaver. The film redoes the same jokes, with funny Christmas sweaters, and another Firth and Grant fight. These are also the funniest moments. At some point the film goes off the rails in such a confusing fashion. Jones ends up arrested because of drug possession and she winds up in a Thai prison. This sounds like some depressing drama, but it's OK, because she teaches the inmates how to have fun with a song and dance number and she also gives them chocolate. If a movie makes a Thai prison look good, I'm pretty sure it fails overall. It also has a climax where they play 3 songs back to back, I assume to sell that ever important soundtrack. A guaranteed hit on Mother's Day I bet.

Warning spoilers! Second part, she gets her man, ends up in a Thai prison, loses her man, gets him back again. Fave scene - fighting in the fountain. Hilarious! Great cast.

I love Bridget Jones. As good as the first one, I would even say better. An exceptional sequel. Extremely hilarious! She never fails to impress. Renee Zelwegger plays her perfectly. The skiing scene is my favourite. So funny!