A Brief History of Time1992 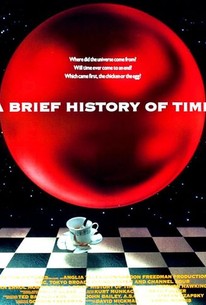 A Brief History of Time Photos

A Brief History of Time is based on cosmologist Stephen Hawking's 1988 bestseller of the same name. This anecdotal film concerns itself as much with Hawking's day-to-day life as it does with his unorthodox theories about the universe. Only the most close-minded viewer will be bothered by the ALS-suffering Hawking's physical appearance and his inability to move and speak without assistance (as narrator of the film, he utilizes a voice synthesizer, which he capriciously refers to as "my American accent"). Director Errol Morris inventively adopts a semi-dramatized approach to his interviews with Hawking's friends and relatives: they all appear in fabricated sets, and are lovingly photographed and lit as if they were starring in a film. Though of necessity a "talking heads" effort, A Brief History of Time is also cunningly and subtly cinematic. ~ Hal Erickson, Rovi

News & Interviews for A Brief History of Time

View All A Brief History of Time News

Critic Reviews for A Brief History of Time

A Brief History of Time is an elegant, inspirational and mysterious movie. Morris turns abstract ideas into haunting images, and keeps them spinning in the air with the finesse, and playfulness, of a master juggler.

Few of us can judge Hawking's intellect, but any of us can sense that fire, that insistence of self on self.

[The film has] a sophisticated agenda that's more about association than data or personal trivia, and Morris' philosophy takes it to places a conventional documentary could never go.

I'm pleased I saw the film, such as it is, but it doesn't do justice to Hawking's genius or to Morris' own genius, and I was left with the question of whether even Morris had ever finished the book.

It is indeed a narratively dryer, visually weaker film than it's predecessor, nor as straight up strange as the two that preceded that, but on its own there is plenty to love.

A Brief History delivers a clear, often fascinating precis on the investigations and beliefs of one of the world's leading scientific theorists. Yet Morris is too shrewd a documentarian to miss the drama of Hawking's life.

Morris. Hawking. Two of my favorite artists together. It couldn't miss, and it didn't.

It's accessible, informative and entertaining.

A capable documentary, but the title's misleading. It's more about Hawking himself than the book this docu takes its name from.

Audience Reviews for A Brief History of Time

As conventional as a routine documentary made for television, it feels not only superficial in the way it covers Hawking's life and theories (sometimes even lacking in clarity) but also irritating as it doesn't let us know who the interviewees are (there are no captions whatsoever).

Plays with your head - in a good way.

It has the potential to be a snoozefest but it is well shot and therefore both the film and subject keep your interest. Everyone should have the experience of seeing what spending time with Mr. Hawking is really like.

A Brief History of Time Quotes