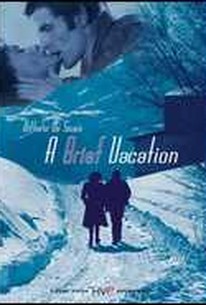 Vittorio De Sica's A Brief Vacation (Una Breva Vacanza) stars Florinda Bolkan as a downtrodden working woman. Forced to support herself, her children, her physically incapacitated husband and her obtrusive brother and mother, Bolkan contracts tuberculosis. She is granted a brief vacation at a health spa, where a whole new world--and potential new life--is opened up to her. A Brief Vacation was scripted by the prolific Cesar Zavattini, who like De Sica had once been a guiding force in the Italian neorealist movement. Though not De Sica's final film, A Brief Vacation was the last of the director's work to be released in America. ~ Hal Erickson, Rovi

Adriana Asti
as Scanziani
View All

It's a love story, a very brief and poignant one, surrounded by a lot of anger. And it's a "woman's picture" of the new sort, the kind in which women make up their own minds and make their own mistakes.

Its perfection is a fitting last testament to a brilliant film maker.

It would be nice to be able to report that this charming man, gifted actor, and once outstanding film maker regained at the end that cinematic power that had been steadily seeping away from him. Not so, alas.

This was De Sica's penultimate film and his last film released in America.

There are no featured audience reviews yet. Click the link below to see what others say about Una Breve Vacanza (A Brief Vacation)!