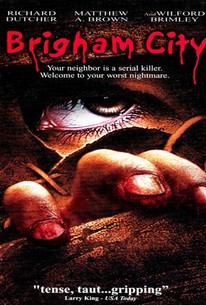 In this dramatic murder mystery from the director of God's Army, Richard Dutcher -- who is also this film's writer, producer, and star -- plays Wes Clayton, a young deputy sheriff who resides in a quiet Mormon community called Brigham. The town is turned upside down when a woman from California is found murdered near her car. Wes, with the aid of his young deputy (Matthew A. Brown), the town's retired sheriff (Wilford Brimley), and an idealistic secretary (Carrie Morgan), is sent to investigate the bizarre occurrence. A federal agent (Tayva Patch) also becomes involved, and Wes slowly finds himself becoming the spiritual leader of this typically sleepy small town. He must unveil some of its underlying secrets to solve the murder, while also trying to keep the peace of the Mormon community surrounding him. This feature, like God's Army, was independently produced by Dutcher with the aid of Mormon supporters.

Matthew A. Brown
as Terry

Madison Gordon
as Sommers Girl No. 1

Bill Osborn
as B. Markham

Michelle Evans
as Woman No. 1

Becky Christensen
as Woman No. 2

Teddy Carter
as Boy No. 1

Ethan Dutcher
as Boy No. 2

Kellen Jones
as Priest No. 1

Ian Ferguson
as Priest No. 2

Tori Houston
as Sommers Girl No. 3

Eli Dutcher
as Sommers Girl No. 1

Eva Terranova
as Markham Girl No. 2

The performances ... are impeccable.

In some ways it's an interesting failure.

An intriguing look at the Mormon Church wrapped around an equally engaging whodunit.

Moviegoers of any (or no) religious persuasion can share in the simple satisfaction of [Dutcher's] tense, well-spun murder mystery.

Several scenes in this movie progress at a snail's pace.

I guess the big surprise for me was in how well the murder mystery was crafted and so smoothly intertwined with the film's religious trappings.

That the Sheriff investigating the case is a bishop in the Mormon Church is certainly unusual, if not unprecedented, in movies. That this low-budget independent film, with lots of religious overtones, happens to be a well-made film is also unusual.

...takes some inappropriate religious liberties, but still manages to be downright creepy and suspenseful.

An important spiritual statement--while at the same time proving that a movie can be dramatic without being profane, thought- provoking without being graphic, and moving without the typical Hollywood shock techniques.

Filled with actors who deliver such flawless performances that you have to keep reminding yourself that they're just acting.

Isn't a bad little thriller in its own right.

For the past decade, I've heard great things about Brigham City, but I've been very hesitant to see it. Aside from having a mostly unknown cast, the film was written, directed, produced, and starred Richard Dutcher, who created a production company called Mormon Cinema, which only makes Mormon related films. I have found that when a film comes from such a strong religious backing, that it usual has a preachy agenda, and tends to focus more on religion than anything else, but to my surprise, Brigham City does not. The film does takes place in a Mormon community, all the characters are Moron, and there is a religious angel to the film, that includes several scenes in the church, which were slow, but thankfully not overwhelming. The story centers around this small religious community in Utah, that is suddenly rocked by a series of murders. Dutcher, plays the sheriff, a highly respect, deeply religious man, grieving for the loss of his family. His town has always been a paradise and has never faced anything like this before, so the sheriff needs to come up with some pretty interesting ways to catch the killer. Dutcher was excellent in his role, after all he wrote it, and who else is better equipped to play such a role? What I really liked was how different the story was, this wasn't just your typical manhunt for a killer on the loose, there were many different facets to this film that made it unique. What gave Brigham City it's fourth star was the amazing twist at the end that no one will see coming. I've seen a lot of films like this and 9 times out of 10, I have the killer pegged before they are revealed, but this film complete blindsided me, which proves to be just another example of clever it is. Yes, there is some religion and yes much of the cast in unknown, but I found this film to be fascinating. Brigham City had me captivated and on the edge of my seat, but most important of all it made me think and managed to really surprise me.