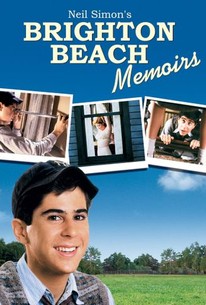 Brighton Beach Memoirs is the first of playwright Neil Simon's unofficial "autobiographical trilogy" (it was followed by Biloxi Blues and Broadway Bound). Jonathan Silverman repeats his stage role as Simon's teenaged alter-ego Eugene, who lives in 1937 Brooklyn with his parents (Blythe Danner and Bob Dishy), older brother Stanley (Brian Drillinger), aunt (Judith Ivey) and female cousins (Stacey Glick and Lisa Waltz). Much is made of Eugene's burgeoning sexual self-awareness and his father's efforts to support his huge extended family on his meager salary.

Marilyn Cooper
as Woman in Street

... a regularly funny and at times affecting movie that captures, if not always successfully, the kind of back-and-forth of any ordinary family.

The stage version of Brighton Beach Memoirs seemed much more alive than this film.

...a deliberately-paced yet mostly compelling drama...

The usual savory Simon mix of humor and pathos never really goes beneath the surface.

The general measure of audience enjoyment for a film based on Simon has everything to do with one's tolerance for the playwright.

I remember watching this on HBO when I was a kid. Can't remember exactly what it was about except that Jon Silverman hooked up with someones wife...HEY I was 13 so that was all I was thinking about anyway.