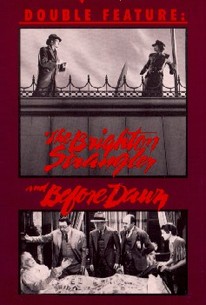 John Loder plays a prominent London actor, lately starring in a play about a maniacal strangler. When the theatre is bombed by the Nazis, Loder suffers a head injury. Thereafter, he cannot separate fact from fiction, and periodically becomes the strangler that he is playing on stage. Loder's lady love June Duprez puts her own life on the line in attempting to save Loder from himself. The Brighton Strangler benefits from its brisk 67-minute running time, which allows the story to unfold without undue padding or muddled psychological overtones. Interestingly, John Loder's character is triggered into becoming a murderer whenever someone inadvertently recites one of the lines from his play--a dramatic device later utilized to fuller effect in Richard Condon's The Manchurian Candidate.

Ian Wolfe
as Mayor
View All

Critic Reviews for The Brighton Strangler

The film had too many plot holes to be believable...

There are no featured reviews for The Brighton Strangler at this time.