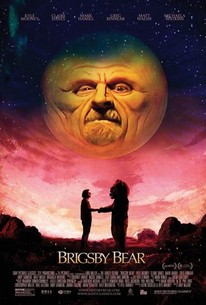 Critics Consensus: Audiences attuned to Brigsby Bear's strange frequency will be moved by its earnest -- and endearingly original -- approach to pop culture's impact and the creative urge.

Critics Consensus: Audiences attuned to Brigsby Bear's strange frequency will be moved by its earnest -- and endearingly original -- approach to pop culture's impact and the creative urge.

Critic Consensus: Audiences attuned to Brigsby Bear's strange frequency will be moved by its earnest -- and endearingly original -- approach to pop culture's impact and the creative urge.

Brigsby Bear Adventures is a children's TV show produced for an audience of one: James (Kyle Mooney). When the show abruptly ends, James' life changes forever, he sets out to finish the story himself and must learn to cope with the realities of a new world that he knows nothing about.

Andy Samberg
as Eric
View All

The rash of real-life cases in which women or children were kidnapped and held captive for years has played out on American movie screens as drama (Room), horror (10 Cloverfield Lane), and now cottage cheese.

... little of it makes tonal sense.

Where the film best succeeds is in creating a credible character who has been insulated from the world he now finds himself flung into.

Against the odds, Brigsby never descends into cynicism.

For all the film's celebration of imagination as a tool for escape, the trajectory it follows is too uninspired.

A film about a cult that might well attract a cult following itself. But it's only moderately successful, with the early scenes hinting at a bolder, more satisfying tale that could have been.

Director Dave McCary has made an adorable film, celebrating ingenuity, and ones passion for creativity.

Since James' quest is to complete the Brigsby Bear story, the film becomes a celebration of niche fandom, one that is sweet without denying the gravity of what has occurred.

It sounds like it's a kids' film, but it isn't. Looks like a daft comedy, but it isn't. It has an indescribable style, a captivating lead and a memorable story.

Brigsby Bear only works as a parable, though, because it also works as a character-based, emotional narrative. McCary handles the material in a way that is thoroughly sweet without ever being cloying or cutesy.

While I wasn't bored by "Brigsby," neither was I fully engaged. The problem is that the film raises but never fully engages with the existential questions it raises.

In addition to solid writing, Mooney's take on James is consistently strong and promising for possible roles outside of pure comedy.

A commentary on those souls whose lives are all but empty but for immersion into fantasy worlds wrought by skilful (or not) creators. The set-up here is interesting if unrealistic, while the follow-through is more movie-of-the-week than serious insight. Still the point is a salient one, insuring timeliness.

There's not a single note in this Spike Jonze wannabe Sundance indie that rings true or plausible, as it plods along with serious tonal issues until reaching a stupid ending in which the characters behave in ways that are completely incoherent with what we just saw from them.

I know that tastes can't change overnight, but it's a shame that audiences can't gravitate more to movies like this. Films like this are very rare, due to the fact that they'll hardly ever snag a major release by a large studio. Not to compare the two, but last year's release of Swiss Army Man was so unique and weird that I ate it up, and I felt the exact same way about this year's Brigsby Bear, which could very well end up being my absolute favorite film of the year. Unique films are a breath of fresh air, but not all of them are great, because the stories themselves may not explore enough to truly warrant award recognition. Although Brigsby Bear won't be winning any major awards this season, here is why it's a wonderful piece of cinema in my eyes. From first-time feature film writer Kyle Mooney and direct time feature film director Dave McCary, Brigsby Bear follows James Pope, a young man with a backstory that I can't reveal throughout this review, who has only ever seen one television show, called Brigsby Bear. When there aren't any more episodes coming out, he sets out on a mission with a few others to finish the show themselves. Becoming a filmmaker, gaining new friends, and learning many moving and comedic life lessons, this is a story worth showcasing to a very large audience. Unique, weird, and powerful all at once, this movie is elevated by a wonderfully sincere and comedic performance by Kyle Mooney as the lead. It's very rare that a comedian can be simultaneously funny and dramatic at the same time, making it truly seem that this is a real-world scenario unfolding on-screen. Not only did this story feel authentic to me, but it touched me on a personal level in terms of how there would definitely be people like this if certain situations were to present themselves to the world. Mooney is an actor that I believe many people should keep an eye on. Sure, his YouTube career is where he started and he's most known for his role on Saturday Night Live, but he's one of those rare performers that I believe will break out and become very famous in years to come. I truly believe that this is a flawless film for the story it's trying to convey. No film is perfect, but a film can be done perfectly when looked at a certain way, and I believe film lovers and even filmmakers themselves will be the ones who love this film the most. Original ideas are slim to none throughout mainstream media nowadays, but I dare you to come up with a premise like this throughout the past ten years. Yes, there are always similarities in every story, but when a film can surprise you even in its first act, it's something special. In the end, Brigsby Bear is a perfect little indie film for fans of cinema, well-written, well-directed, calmly scored with care, and wrapped in a nice little bow of uniqueness. I found myself wanting to rewatch this movie the second it concluded. Although short and to the point at a mere 97 minutes, there are many hidden elements that will elevate the movie even more upon second and third viewings. I'm sure the fact that it's so weird will turn some audiences away from fully enjoying it, but like I said, hardcore film lovers and filmmakers of any kind are truly the ones that will most likely love Brigsby Bear. This is easily one of the best films I've seen all year.