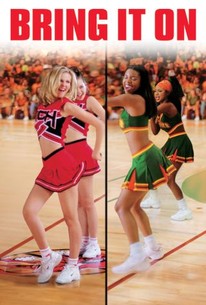 Critics Consensus: Despite the formulaic, fluffy storyline, this movie is surprisingly fun to watch, mostly due to its high energy and how it humorously spoofs cheerleading instead of taking itself too seriously.

Critics Consensus: Despite the formulaic, fluffy storyline, this movie is surprisingly fun to watch, mostly due to its high energy and how it humorously spoofs cheerleading instead of taking itself too seriously.

Critic Consensus: Despite the formulaic, fluffy storyline, this movie is surprisingly fun to watch, mostly due to its high energy and how it humorously spoofs cheerleading instead of taking itself too seriously.

Bring It On Videos

Bring It On Photos

The hard work, dedication, and personal politics behind "rah rah rah!" and "sis boom bah!" go under the microscope in this engaging teen comedy. Torrance Shipman (Kirsten Dunst) discovers that being captain of her San Diego high school's six-time championship-winning cheerleading squad is more complicated than she had imagined. Torrance's parents want her to spend more time on her homework, her boyfriend wants her to spend more time with him, and she learns that the squad's former captain stole some of their best routines from other teams -- and that Isis (Gabrielle Union), captain of a top squad at a crosstown, inner-city high school, plans to fight back this year. To make things worse, when one of the cheerleaders is injured, Torrance is forced to replace her with Missy (Eliza Dushku), a cynical new kid who is involved only because the school doesn't offer gymnastics. In the midst of this chaos, with the national championship around the corner, Torrance couldn't have picked a worse time to fall in love with Cliff (Jesse Bradford), a classmate who cares a lot more about punk rock than school spirit. Dunst trained with a cheerleading squad for her role, though a double performed the more complicated stunts. ~ Mark Deming, Rovi

David E. Willis
as Emcee No. 1

Beth LaMure
as Emcee No. 2

News & Interviews for Bring It On

87 Fearless Women Movie Heroes Who Inspire Us
All 42 Fresh Movies and Originals Coming to Netflix in January
RT on DVD: The Simpsons, Stardust, and More!

View All Bring It On News

Critic Reviews for Bring It On

This earnest and arch story -- so fast paced its formulas are wonderfully obscured -- has an adolescent energy and a tempered sexuality, and it's infused with the moral agenda of a warmly didactic sitcom.

Bring It On spins off one sly little joke after another, and the smart ensemble makes every one of them work.

Who would have thought that a film about competing cheerleading squads would turn out to be the one very pleasant surprise in this very dismal summer season of moviegoing?

Not quite the powder-puff fluff it might have been.

"Perhaps the most unique thing about Bring It On is the way it realistically visualizes cultural appropriation."

this does not hold up well at all

There's nothing authentic about Bring It On, which is at its best when completely immersed in satirical superficiality.

It's fluffy, it's predictable, and it's more than a little bit gratuitous, but Bring It On is also fun and pretty clever -- for a movie about high school cheerleading.

Audience Reviews for Bring It On

Saw this sometime about 10 years ago, and all I remember is cheerleaders cheering. It was not a memorable film, and I did not enjoy it at the time.

A decent little comedy and one of the early dance films which are very popular now. Thankfully the main lead characters rise this slightly above your average teen comedy.

Quite entertaining despite being a cheerleader film.

Bring It On Quotes