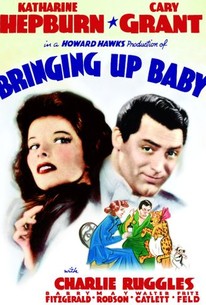 Critics Consensus: With Katharine Hepburn and Cary Grant at their effervescent best, Bringing Up Baby is a seamlessly assembled comedy with enduring appeal.

Critics Consensus: With Katharine Hepburn and Cary Grant at their effervescent best, Bringing Up Baby is a seamlessly assembled comedy with enduring appeal.

Critic Consensus: With Katharine Hepburn and Cary Grant at their effervescent best, Bringing Up Baby is a seamlessly assembled comedy with enduring appeal.

Katharine Hepburn and Cary Grant star in this inspired comedy about a madcap heiress with a pet leopard who meets an absent-minded paleontologist and unwittingly makes a fiasco of both their lives. David Huxley (Grant) is the stuffy paleontologist who needs to finish an exhibit on dinosaurs and thus land a $1 million grant for his museum. At a golf outing with his potential benefactors, Huxley is spotted by Susan Vance (Hepburn) who decides that she must have the reserved scientist at all costs. She uses her pet leopard, Baby, to trick him into driving to her Connecticut home, where a dog wanders into Huxley's room and steals the vital last bone that he needs to complete his project. The real trouble begins when another leopard escapes from the local zoo and Baby is mistaken for it, leading Huxley and Susan into a series of harebrained and increasingly more insane schemes to save the cat from the authorities. Inevitably, the two end up in the local jail, where things get even more out of hand: Susan pretends to be the gun moll to David's diabolical, supposedly wanted criminal. Naturally, the mismatched pair falls in love through all the lunacy. Director Howard Hawks delivers a funny, fast-paced, and offbeat story, enlivened by animated performances from the two leads, in what has become a definitive screwball comedy. ~ Don Kaye, Rovi

May Robson
as Aunt Elizabeth

Nissa
as Baby the Leopard

Asta the Dog
as George the Dog

Critic Reviews for Bringing Up Baby

It seems that almost any star, including Irene Dunne, Carole Lombard and Myrna Loy, may attempt antic comedy and make a go of it, but that medium is not for Miss Hepburn in the theater where she is accepted as an important dramatic actress.

The enduring fascination of this 1938 screwball comedy is due to much more than its uproarious gags.

A perfect example of why directors (and even us brilliant professional critics) can often be completely in the dark about what works.

There is little rhyme or reason to most of the action, but it's all highly palatable.

Though it's almost impossible, try to sit back sometime and enjoy this 1938 Howard Hawks masterpiece not only for its gags, but for the grace of its construction, the assurance of its style, and the richness of its themes.

Grant... sails through the film's slapstick with breathtaking panache - only a supremely graceful actor could perform clumsiness so skilfully or amusingly.

It is, to put it bluntly, the perfect screwball comedy, a rapid-fire barrage of ludicrous mayhem whose absurdity only gets funnier as it goes along, thanks in huge part to the game dedication of its cast.

Thanks to the efforts of both Hepburn and Grant, Bringing Up Baby is one of the best screwball comedies of all time.

One of those movies that seems to improve upon repeat viewings.

Indeed, it's her chemistry with Grant which makes for such a wonderful spectacle. Hawks ensures that the pair lurch from one debacle to another.

The story is twisty and plenty silly, but the comic chemistry, between the leads, and also the side players, many of whom from the Vaudeville circuit, makes even the most tumultuous encounters run smooth as a gear box.

Audience Reviews for Bringing Up Baby

Katharine Hepburn's performance alone is dynamic in this comedic classic. Bringing Up Baby is comedy gold with brilliance in its ensemble. The laughter is timeless, the dialogue is crisp and, once again, Hepburn and Grant formulate a charming duo. 4/5

It is ironic that this enjoyable film flopped when it was still original and now is highly regarded as a masterpiece when it is obviously outdated and full of silly gags for today's standards - and despite her great chemistry with Grant, Hepburn is more irritating than funny.

Cary Grant (in a pair of glasses) plays a milquetoast nerdy-nerd scientist who's been assembling pieces of a dinosaur skeleton for years. While schmoozing a rich lady's lawyer on the golf course, he runs into Katharine Hepburn, a scatter-brained (yet attractive) lunatic who brings trouble with her wherever she goes, especially to the scientist. For good measure, they throw a leopard named baby (whose favorite song is "I Can't Give You Anything But Love, Baby") into the mix and you have what might be director Howard Hawks' screwiest screwball comedy, lighter-than-air and yet heartily amusing. If there can be any criticism (and really, it's hard to take too critical a glance at something so lightweight), it may be with Hepburn and her portrayal of Susan Vance. The character is willfully ignorant, is mainly used as a means of advancing the comedic situations. But in working so hard to achieve this ignorant arrogance, the film loses a little bit of it's momentum (and good will). It's only once the film really gets rolling that Hepburn's comedic inadequacies can be overlooked (in fact, the film is almost a tale of two performances from Hepburn, the overly affected and forced first half of the performance, and the more flowing feel the performance achieves by the end). It's an unusual film to say the least.

"Bringing Up Baby" sucks. I really have no idea what this film is about aside from the fact that it involves a leopard, a bone, and a really annoying lady. Maybe I played too much Temple Run while watching it.