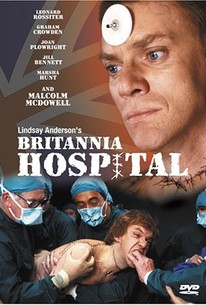 Brittania Hospital attempts to put on its best face in preparation for a visit from the Queen Mother, despite the presence of dissatisfied patients, angry protesters, and a chief surgeon turned mad scientist. This very British black comedy mixes broad farce with pointed political satire.

Marsha A. Hunt
as Amanda

Kevin Lloyd
as Picket
View All

The comedy becomes a circus and ends up feeling artificial. [Full Review in Spanish]

This attempt at Swiftian satire wasn't too swift.

The bitterness of the satire has served to marginalize Anderson's final chapter. See it, but be aware that it's a chilly blast of unpleasantly cold air.

If you like films that leave an impression on you - then you'll like this. I saw this for the first time when I was quite young, I think my dad wished he'd known how weird it would get, or he probably wouldn't have let me watch it with him. Whilst there is a riotous strike going on outside the hospital there is weirdness going on inside, as an eccentric doctor performs some truly sadistic acts on his patients to fulfill his own ambitions. Its full of faces any 30-plus British audience will recognise, and if you're an Orbital fan you'll love the speech at the end which they sampled for Snivilisation. A cult black comedy, with some quite horrific bits in, its quintessentially British, but definitely not in the vain the Full Monty or Four Wedding.

I'm not sure I understood the politics behind the story, but it's a very interesting movie, very unique. It's actaully the third in a series of movies starring McDowell. I'd only recommend seeing this if you've seen the other two.