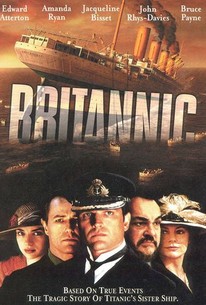 H.M.S. Britannic was the sister ship of the Titanic, and like its more famous sibling, the ship was fated to be lost while at sea. This drama imagines what might have led up to the ship's sinking on its final voyage. Vera Campbell (Amanda Ryan) is an attractive young woman who is an undercover agent for the British government. She is ordered to cross the sea aboard the Britannic in hopes of learning more about German spies who may attempt to sabotage the great ship. During the course of the voyage, Vera becomes infatuated with Reynolds (Edward Atterton), the Britannic's chaplain; he also finds himself attracted to her, but while his status as a man of the cloth presents an obstacle in their romance, it's nothing compared to Vera's discovery that Reynolds is one of the German agents she's been assigned to ferret out. Britannic also stars Jacqueline Bisset, Bruce Payne, and John Rhys-Davies. Incidentally, while in real life the Britannic did indeed sink off the Greek coast, it's conceded to have fallen prey to a torpedo -- rather than any sabotage on board.

Daniel Tatarsky
as Martin
View All

There are no critic reviews yet for Britannic. Keep checking Rotten Tomatoes for updates!

The Britannic was the sister ship of the RMS Titanic, and like her big sister before her, the ship sank. This a good made for TV film about the disaster and though a bit fictional, is a nonetheless well made film directed by famed Australian Exploitation director Brian Trenchard-Smith. Although there are noticeable weak points of the film, most notably its low production value, the subject was handled well, and it was an entertaining film for what it tried to be. The film is one that could have been better, but nonetheless it works well due to the fact that the real story behind the fiction is quite interesting, and it's what keeps you involved in enjoying this film. The cast do a fine job here, and overall despite its fictional take on the actual events, Britannic is worth seeing if you enjoy these types of movies. The film has its imperfection, and it lies solely on the fictional story, but the events itself of the disaster I found quite good and entertaining. If given a script rewrite, then maybe this would have been a better film. But considering the films limitations, Britannic is a film that isn't bad either, it just needed a script polish to really make it really work. But like every made for TV film, this film leaves a lot to be left unsaid about those events. At least the filmmakers managed to make an entertaining movie out of the story of Titanic's sister ship. If you're interested in the subject, this is worth a look, but be prepared for a dose of fiction mixed in with the real events, but of course that was done for a more dramatic effect, very much like what James Cameron did with the romantic storyline in his overly awful and overrated film Titanic.