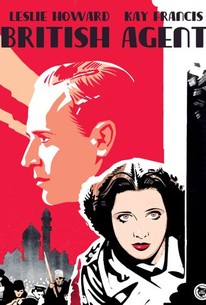 British Agent starred the Hungarian/British actor Leslie Howard in the title role, was directed by full-fledged Hungarian Michael Curtiz, and costarred American leading lady Kay Francis as a Russian spy. Based on the memoirs of R. H. Bruce Lockhart, who had been the unofficial British emissary to the Russian Revolutionary government in 1917, British Agent spends more time on its romantic subplot than in recreating the birth of Bolshevism. Leslie Howard's purpose in this film is to dissuade the Bolsheviks from signing a separate treaty with the World War I German regime. It is obvious to modern-day viewers that Howard is merely looking after Britain's interests and has no concern for the Russians; this was par for the course in a 1930s film, but does not play well with less jingoistic audiences of the 1990s. The most interesting aspect of British Agent is the performance of saturnine Irving Pichel as a young Josef Stalin.

Walter Byron
as Under Secretary Stanley

British Agent is so agreeable and exciting to watch that the historical inventions won't worry you.

Kay Francis as a Soviet patriot and Leslie Howard as a British diplomat, in an unconvincing picturization of R. H. Bruce Lockhart's best-seller.

There are no featured audience reviews yet. Click the link below to see what others say about British Agent!