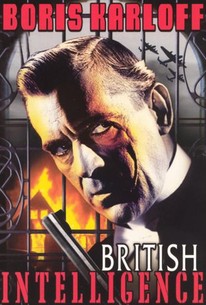 Though set during WW1, British Intelligence was obviously thrown together to capitalize on the outbreak of WW2. A remake of the 1930 espionager Three Faces East, the film stars Boris Karloff as Valder, the sinister butler of a British cabinet minister. It is quite possible that Valder is a German spy, and equally likely that the mysterious Helene von Lorbeer (Margaret Lindsay) is likewise working for the enemy. In fact, the audience is never quite certain who the good guys and bad guys really are until the climax, which takes place during a German zeppelin raid of London. As a balm to 1940 audiences, the film includes an early comedy scene in which German military protocol is upset by a clumsy corporal (Willy Kaufman) who bears a startling resemblance to a certain Nazi dictator.

A top-of-the-line B-film spy drama, filmed during WWII but set during WWI.

The lynchpin of this spy thriller is that they don't tell you who is on who's side. Oh, everyone says that they're on this side or the other, yes, but they're probably lying about it. Which raised the stakes considerably. Is she working for the Germans? Is he working for the British? You are never certain, and so when somebody starts with the platitudes about their homeland one is naturally suspect. The inimitable Karloff slithers from one side of the screen to the other, a serpent seeking prey, and this wartime B film soars for it. Good stuff.