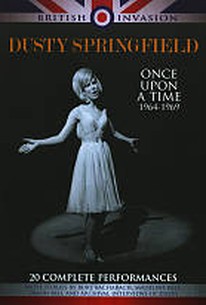 Features 20 definitive complete television performances by Britain's greatest pop diva including "You Don't Have To Say You Love Me," "Son Of A Preacher Man," "Wishin' And Hopin'" and "I Only Want To Be With You." Dusty's story is told through new interviews with Burt Bacharach, Madeline Bell (who sang back-up for Dusty in the `60s), Simon Bell (Dusty's back-up singer from the `70s to the `90s), and a newly discovered interview from 1978 with Dusty herself. Bonus features include Dusty's complete 1965 and 1966 New Musical Express Poll Winners Concert appearances as well as a duet with Burt Bacharach on "A House Is Not A Home." Annie Randall, Dusty's biographer, wrote the accompanying essay.

Critic Reviews for British Invasion: Dusty Springfield - Once Upon a Time, 1964-1969

There are no critic reviews yet for British Invasion: Dusty Springfield - Once Upon a Time, 1964-1969. Keep checking Rotten Tomatoes for updates!

There are no featured reviews for British Invasion: Dusty Springfield - Once Upon a Time, 1964-1969 at this time.