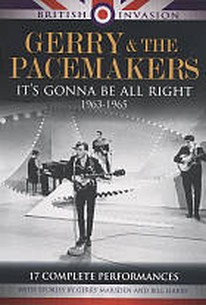 The first band ever to have their first three singles top the British charts, Gerry & The Pacemakers rivaled the Beatles in the early years of the British Invasion. Their first official anthology DVD features 17 classic complete performances including the smash hits "How Do You Do It?," "I Like It" and "You'll Never walk Alone" as well as the timeless classics "Don't Let The Sun Catch You Crying" and "Ferry Cross The Mersey." Also included is an interview with Garry Marsden that was conducted exclusively for the DVD at Liverpool's legendary Cavern Club. Bill Harry, founder/publisher of Mersey Beat, the music paper that originally chronicled the Liverpool scene, also tells the band's story both on screen and in his accompanying liner notes.

Gerry and the Pacemakers

There are no critic reviews yet for British Invasion: Gerry & the Pacemakers - It's Gonna Be All Right, 1963-1965. Keep checking Rotten Tomatoes for updates!

There are no featured reviews for British Invasion: Gerry & the Pacemakers - It's Gonna Be All Right, 1963-1965 at this time.