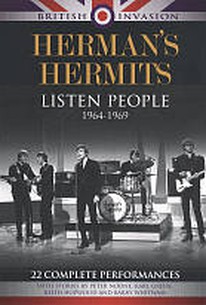 The DVD is their first official anthology chronicling their meteoric rise melding a traditional British music hall influence with good time rock `n roll. Among the 22 full-length performances are all of their biggest hits including "I'm Into Something Good," "Mrs. Brown You've Got A Lovely Daughter," "I'm Henry VIII, I Am" and their later evocative masterpieces "No Milk Today," and "Listen People." The Herman's Hermits' story is told by original members Peter Noone, Keith Hopwood, Karl Green and Barry Whitwam as well as in the accompanying essay by GRAMMY-winning music historian Rob Bowman. A complete concert filmed in 1966 for Australian television is included as a bonus feature.

There are no critic reviews yet for Herman's Hermits: Listen People 1964-1969. Keep checking Rotten Tomatoes for updates!

There are no featured reviews for Herman's Hermits: Listen People 1964-1969 at this time.