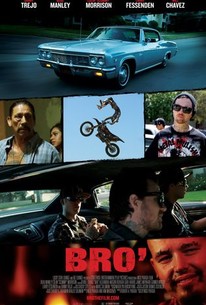 BRO' chronicles the rite of passage of a young suburban college student, Johnny. When Johnny meets Stephanie, she takes him to meet her brother, Jesse, at a freestyle motocross event in Riverside, California. Jesse takes the young, eager Johnny under his wing and shows him the party lifestyle. His involvement with drugs, girls, and freestyle motocross begin to clash with his religious and moral upbringing. It only takes Johnny a few mistakes to end up doing time in the L.A. County Jail, also losing his girlfriend and his reputation. Upon his release, Johnny must decide what's truly important. -- (C) Official Site

Will Chavez
as Johnny

Danny Trejo
as Gilbert
View All

Sends its college-age protagonist, Johnny (Will Chavez), tumbling into seductive illegality with the efficiency of those Direct TV commercials that paint exaggerated worst-case scenarios for cable customers.

We're not sure whether to laugh at, pity, or cheer for these people.

There are no featured reviews for Bro' at this time.