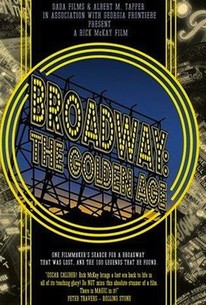 Critics Consensus: Broadway: The Golden Age is a breezy, affectionate tribute to a sparkling array of the era's best and brightest.

Critics Consensus: Broadway: The Golden Age is a breezy, affectionate tribute to a sparkling array of the era's best and brightest.

Critic Consensus: Broadway: The Golden Age is a breezy, affectionate tribute to a sparkling array of the era's best and brightest.

Directed by Rick McKay, who traveled across five continents during the documentary's production, Broadway: The Golden Age is both a celebration of current Broadway stars and a tribute to Broadway legends past. Through a plethora of interviews and vast amounts of archival footage, McKay presents a variety of factoids, anecdotes, and memories from over 100 Broadway actors, writers, and directors. The careers of Laurette Taylor, Kim Hunter, Jessica Tandy, and Marlon Brando are all animatedly retold, as is some of the Broadway "lore of olde," such as Angela Lansbury's struggle to land a role in +Mame and the shocked reaction to +West Side Story on its opening night. In addition to footage and discussion regarding highly successful Broadway stars, a variety of actors recount their experiences and struggles in finding even a small amount of critical recognition. The cast includes Shirley MacLaine, Bea Arthur, Edie Adams, Alec Baldwin, and Kaye Ballard, and many others.

For theater lovers -- on both sides of the footlights.

Old-timers, showbiz buffs and big-stage wanna-bes will not be disappointed.

Rather than listen to these old-timers reminisce about the good old days ... my advice is to get out and support your local thespians instead.

McKay's straightforward cinematic valentine, which also includes rare archival stage footage, is a treat for those bedazzled by the idea of Broadway in its prime.

[The subjects] eagerly unwind before McKay's one-man camera, reminiscing about everything from their finest hours to the days when ticket prices still ran in single digits.

It takes more than a fan to analyze the legacy of a period. But a fan is just what it takes to indulge in that legacy, which is exactly what Broadway: The Golden Age is all about.

It's the sort of history you could nibble on for hours.

Whether it's Julie Harris weeping as she recalls an Ethel Waters performance she saw 60 years ago or Marian Seldes lamenting the cruelty of show biz or Ann Miller blithely carving a decade off her age, there's no arguing that these years were golden.

Its appeal isn't likely to cross over to those who don't already have the Broadway bug, or share the recollections themselves.

I can think of no higher compliment than to report that after seeing it, I wanted to rush out and see a play.

What makes Golden Age compelling cinema is the archival material that McKay has assembled to bind his loose and often casually unfocused interviews.

The demise of the New York theater is, of course, too complex a subject to be contained in a study of less than two hours, but this free-flowing film certainly hits the high points as it flips around its talking-head celebrity sound bites at warp speed.

fascinating documentary with an amazing bevy of theatre performers and legends.

A living record of an age which unfortunately I will never be able to experience. It is true that Broadway is still with us but it pales in comparison to the stories told in this film about the "golden age".