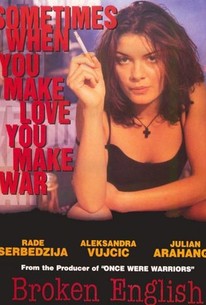 Along with Once Were Warriors, Broken English effectively captures contemporary New Zealand as a society in transition. Broken English dramatizes how the effect of immigration to the cities of New Zealand by both its native peoples, the Maoris, and Europeans seeking refuge from political persecution has not produced a harmonious melting pot. Ivan (Rade Serbedzija) is an embittered Croatian who fled to his wife's native Aukland when war broke out in Bosnia. Brooding over TV news reports on what is happening to his homeland (and displaying more than a little guilt over his flight from there), Ivan lashes out at anyone outside of his insulated Croatian community, including his gentle Maori neighbors. His drug-running business allows him a comfortable lifestyle, but he's still irritated that his young adult daughters won't mind him. The eldest, Nina (Aleksandra Vujcic), is a waitress who takes up with a colleague, a Maori cook named Eddie (Julian "Sonny" Arahanga, who also appeared in Once Were Warriors), in part because he's attractive but also to tweak her father. Complicating matters is an arranged marriage Nina has agreed to with a Chinese immigrant colleague at the restaurant; he's willing to pay her 16,000 dollars just to make his residency legal, so he can be with his girlfriend, Clara. Originally rated NC-17 for an energetic but hardly explicit sex scene between Nina and Eddie, the film was later edited to earn an "R" rating.

The Dalmatian Club Of Auckland
as Ivan's Party Guest

The situation is not original, but the setting makes it seem so, and the director and co-writer, Gregor Nicholas, is alert to nuances of the characters.

Zoe Cassavetes... lets Nora's complicated emotional story play out, and she finds in Posey a strong collaborator in catching all of Nora's tics and charms.

Explores the explosive power of cross-cultural love and the ways one passionate woman finds to escape the prison of prejudice.

The film shies away from a lot of the dramatics it could have gone into, such as prying into the psyches of what drives people to blindly hate.

There are no featured audience reviews yet. Click the link below to see what others say about Broken English!