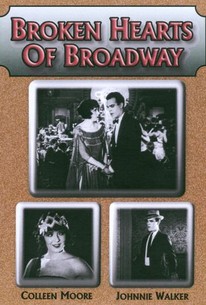 This rags-to-riches Broadway drama, which was made before Colleen Moore starred in the hit Flaming Youth, was actor/director Irving Cummings' first attempt at distribution. Although it was "suggested by" the stage play by James Kyrle MacCurdy, the basic story had been done many times before. A down-on-his-luck author (Creighton Hale) is telling his chauffeur friend, Barney Ryan (Tully Marshall), his tale of woe. Ryan's answer is to relate the story of Mary Ellis (Moore), a country girl who had many of the same struggles. Mary comes to the big city to become a star. Her gold-digging friend, Bubbles Revere (Alice Lake), helps her land a job in the chorus of a Broadway show, but she loses it when she turns down the advances of one of the show's owners. Although she has found romance with struggling songwriter George Colton (Johnnie Walker), Mary is ready to pack it in and go home. Just as she is getting ready to leave, she is arrested for the murder of a friend of the show's owner. The real murderer confesses, and Mary finds happiness and stardom with Colton, who writes a song and then a play based on her adventures. She becomes the play's star and is a hit.

Creighton Hale
as An Outcast

There are no critic reviews yet for Broken Hearts of Broadway. Keep checking Rotten Tomatoes for updates!

There are no featured reviews for Broken Hearts of Broadway at this time.