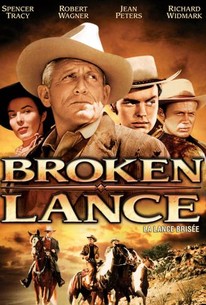 In this Western with curiously Shakespearean undertones, Matt Devereaux (Spencer Tracy) is a ranch owner who has tried to raise his sons to carry on the fierce, hard-working spirit that helped make him a success. However, as a consequence, he never learned to show them affection and treats his boys little better than the hired help. Joe (Robert Wagner), is Matt's son by Native American wife Señora (Katy Jurado). Because of Joe's mixed ethnicity, he is treated prejudicially by his three half-brothers, Ben (Richard Widmark), Mike (Hugh O'Brian), and Danny (Earl Holliman) -- all Caucasian sons of Matt's first wife. Joe loves his father and would do nearly anything for him, but his siblings resent Matt's emotional distance. When Matt discovers a nearby copper mine is polluting a stream where he waters his cattle, he becomes furious and leads a raid on the mine that causes the law to visit the ranch; the police have a warrant to arrest whoever was responsible for the attack. To spare his father the agony and humiliation of a stay behind bars, Joe claims responsibility and spends several years in prison. When he's released, he discovers that Ben and his other brothers rebelled against their father with such extremity that the old man suffered a fatal stroke. While Señora tries to persuade Joe not to seek revenge, Ben is more than willing to fight his brother for taking his father's side. Screenwriter Philip Yordan won an Academy Award for his work on Broken Lance, while Katy Jurado received a Best Supporting Actress nomination for her performance as Señora. ~ Mark Deming, Rovi

E.G. Marshall
as The Governor

What is also noteworthy is the laborious dutifulness with which CinemaScope is used in Broken Lance, which gives the mise-en-scène a rigidity that makes for a certain dryness. Such severity, as one might guess, is not for me.

It's a gripping, framed familial saga of intergenerational misunderstandings, racial hang-ups, and eventually even a court-room drama.

The camera work, in improved widescreen CinemaScope, is handsome.

Very much a product of Hollywood studio system in the 1950's, but it's also a testament to just how good that studio system could be.

Although its theme is not original... Edward Dmytryk... has made his copy-book characters as fresh as his panoramas.

This sturdy Western is basically William Shakespeare by way of Joseph L. Mankiewicz.

There may be debates about Yordan's Oscar-winning script, but Dmytryk's direction of this compelling Western is taut and the acting, especially by Tracy and Katy Jurado (Oscar-nominated), is superb.

Broken Lance succeeds in capturing the brutal intensity of a disrupted family.

It lifts its plot line from Joseph Mankiewicz's powerful 1949 House of Strangers.

One of the earliest elegies to the dying of the West.

While Fox's May 18, 2005 DVD release of their 1954 film "Broken Lance" includes both Widescreen and Full Screen Versions (or Pan & Scan), it is the CinemaScope (2.55:1) version that brings the power and grandeur of this exceptional dramatic Western to life -- that along with the excellent 4-track Stereophonic sound track that was part of its original release. It has been 50 years since we have had the opportunity to see the film in the manner that it was first released theatrically -- and in this form it ranks as one of the finest Westerns of all-time. Rchard Murphy's Oscar winning screenplay provides some excellent dialog and story structure not usually found in the average outdoor film. The cast, all the way from Spencer Tracy to smaller roles like that of E.G. Marshall, are all we developed. Now if Fox would only give the same great release treatment to their 1955 "A Man Called Peter" (only available in Pan & Scan VHS)! It would be wonderful to see this film in CinemaScope with Stereophonic sound once again! 5 Stars 7-9-13