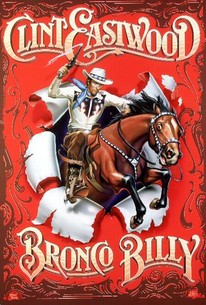 Bronco Billy stars Clint Eastwood (who also directed) as the impresario of a seedy wild west show. Going along for the ride is spoiled socialite Sondra Locke, who is "initiated" by being pressed into service as the wrong end of a knife-throwing act. The rest of the troupe, like Eastwood himself, are losers in life who yearn for the freedom and opportunity of the long-gone Old West. Despite its raucous ad campaign, Bronco Billy is at base a wistful character study, avoiding the usual trappings of car chases and redneck villains and offering quiet chuckles instead of belly laughs. Unfortunately it failed to click with the public, compelling Eastwood to temporarily return to his old crash-bang-pow formula in his next few films.

Douglas Copsey
as Reporter at Bank

George Orrison
as Cowboys at Bar

Chuck Hicks
as Cowboys at Bar

Bobby Hoy
as Cowboys at Bar

Jefferson Jewell
as Boy at Bank

Jenny Sternling
as Reporter at Sanitorium

An affectionate ode to the fading myth of the American West.

Eastwood, much like Burt Reynolds' character in Boogie Nights, welcomes everyone into an unconventional but strangely warm environment.

With a sense of humor and without any pretense, Bronco Billy offers viewers a melancholic image of what once was exciting to people and is now relegated to a children's playground. [Full Review in Spanish]

The good intentions are often outweighed by the awkward execution, as the film frequently tilts away from reverence and into ridiculousness.

"The film's sweetly nostalgic tone also conveys Eastwood's deep love of the Wild West and the simple values of the old-fashioned cowboy characters who fantasize about inhabiting it. "

One of Clint Eastwood's most enjoyable films.

Bronco Billy depicts a genuine screen hero who incarnates the place that cowboys occupy in our slow moving dreams.

This movie clearly means a whole lot to Clint Eastwood, and he does a darn good job of showing why.

If you can overlook the warm fuzzies of this film, it can be charming, lighthearted fun.

A tremendously enjoyable motion picture. One of Clint Eastwood`s best movies and best performances ever. A compelling, well-character drawn and heart-warming masterpiece. It`s wickedly funny, smart and wonderfully entertaining. Eastwood crafts one of his finest performances and possibly his most wonderful character. I loved it, it`s a beautiful blend of humor and drama. The film packs nothing but pure heart and surprises. Its grand entertainment at it`s finest.

a modern tale with a western feel, bronco billy tells an incredibly unique story with solid direction and a perfect blend of humor and drama. i REALLY want to know how billy got his rangler out of jail, but its obvious that eastwood left that one question unanswered to build on the effectiveness of billy's character. overall a solid film.

Clint Eastwood as an anachronistic cowboy in a modern day western that typically pines for the days when men were men etc. etc. Clint's likeable enough, Sondra Locke isn't.

Good-natured and likeable, funny and touching of the Bronco Billy Wild West Show.