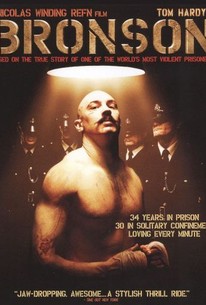 Critics Consensus: Undeniably gripping, Bronson forces the viewer to make some hard decisions about where the line between art and exploitation lies.

Critics Consensus: Undeniably gripping, Bronson forces the viewer to make some hard decisions about where the line between art and exploitation lies.

Critic Consensus: Undeniably gripping, Bronson forces the viewer to make some hard decisions about where the line between art and exploitation lies.

In 1974, a misguided 19 year old named Michael Peterson decided he wanted to make a name for himself and so, with a homemade sawn-off shotgun and a head full of dreams he attempted to rob a post office. Swiftly apprehended and originally sentenced to 7 years in jail, Peterson has subsequently been behind bars for 34 years, 30 of which have been spent in solitary confinement. With an intelligent, provocative and stylized approach, "Bronson" (based on a true story) follows the metamorphosis of Mickey Peterson into Britain's most dangerous prisoner, Charles Bronson.

It's not a masterpiece by any stretch; but it's original and pacy, and those qualities are rare enough.

...the film can barely contain Tom Hardy's performance. It's a Method turn so bloodily immersive it's hard to imagine the actor getting his head straight afterwards.

Bronson doesn't have much to say, but it's a very fun exercise in bad behavior that's neither glamorized nor bemoaned.

This is psychotic behavior as performance art, and Hardy makes it irresistible.

Itâ(TM)s a meditation on the art of rage -- an action painting passing itself off as an action movie.

A figure this luridly fascinating, a personality this ludicrously outsized, warrants something more than your typical biopic.

Refn probably burns too much of the juice he could be using for character motivation or some perspective on crime and punishment on the style-for-style's-sake gangsta glam of Guy Ritchie.

Whichever part you feel the most uncomfortable with, it's worth enduring it for "Bronson" is filled with imaginative and memorable imagery.

It's actually quite an intuitive work, taking Bronson's publicity-courting profile as a base to conjure a lurid opera on the phenomenon of 'Bronson'.

Hardy does an admirable job of making this monster human, which he achieves with surprising wit and a visceral, attention-grabbing passion.

The movie's giddy brio can leave you punch-drunk, and oddly unsatisfied.

A very arty look (a nod to All That Jazz is not inappropriate) at a knucklehead sociopath who was Britain's most violent prisoner. Hardy is good at it, but the gist is rather horrorshow on the ultraviolence side (nod to Kubrick's masterpiece also appropriate).

An ultra-stylish, visceral, electrifying and explosive thrill-ride that's an acid trip into one man's own personal chaos and brutal nature. A bold, beautifully crafted, provocative and intensely entertaining movie. It's an awesome slam of brutal violence, masculine ego and great music. A spectacular and amazing film that shines with mind-blowing velocity. It's explosively hilarious, pulse-pounding and utterly furious. A stunning work of art with great style and compelling storytelling. It's frequently funny and action-packed. A bare-knuckle and very brutal knockout. A dazzling tour de force from Tom Hardy, he gives a incredible and unforgettable movie star performance that shines of Oscar pedigree. Hardy is just flat-out brilliant who manages to be chilling, exhilarating and mind-blowing all at once, probably crafting one of the best screen performances I have ever seen. Director, Nicolas Winding Refn crafts a bold, bloody, enthusiastic and top-notch masterpiece. Movies like this should not be missed. A real instant classic.

Brilliant and eccentric drama film starring Tom Hardy as Charles Bronson born Michael Peterson who is Britain's most violent prisoner. This is a great film that is brilliantly acted by Hardy in the title role. The film is very similar to the Eric Bana film, Chopper. This is a well crafted film that is bold, gritty and in your face. Tom Hardy is terrific in the lead and he showcases his range as an actor with this film. Director Nicolas Winding Refn is a great director and his vision is uncompromising for this picture that showcases a psychotic Tom Hardy playing Britain's most violent prisoner. The performances alone make this one of the most memorable crime films in recent years. If you love stylish, evocative cinema, then you're sure to enjoy this film. Although quite brutal, there's a tone of dark humor throughout the picture that make it enjoyable. Tom Hardy is one of my favorite actors, and with every film he does, he solidifies his craft and delivers something totally unique, eccentric and overall brilliant. Along with his role as Bane in The Dark Knight Rises, I'd have to say this is his second greatest performance. Along with Drive, this is Refn greatest work and he delivers a stunning piece of cinema that is brutal, eccentric and darkly humorous. This is the type of film that you can't tear yourself away from as you want to know how far the character will go into the darkest, most brutal side of Britain's most violent criminal. If you love well structured crime films, then give this film a shot. With brilliant performances by its cast, and near flawless directing, Bronson is a must see crime drama.