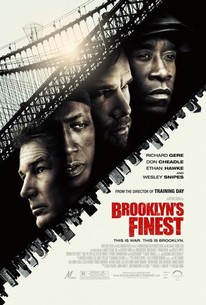 Critics Consensus: It's appropriately gritty, and soaked in the kind of palpable tension Antoine Fuqua delivers so well, but Brooklyn's Finest suffers from the comparisons its cliched script provokes.

Critics Consensus: It's appropriately gritty, and soaked in the kind of palpable tension Antoine Fuqua delivers so well, but Brooklyn's Finest suffers from the comparisons its cliched script provokes.

Critic Consensus: It's appropriately gritty, and soaked in the kind of palpable tension Antoine Fuqua delivers so well, but Brooklyn's Finest suffers from the comparisons its cliched script provokes.

Burned out veteran Eddie Dugan is just one week away from his pension and a fishing cabin in Connecticut. Narcotics officer Sal Procida has discovered there's no line he won't cross to provide a better life for his long-suffering wife and seven children. And Clarence "Tango" Butler has been undercover so long his loyalties have started to shift from his fellow police officers to his prison buddy Caz, one of Brooklyn's most infamous drug dealers. When NYPD's Operation Clean Up targets the notoriously drug-ridden BK housing project, all three officers find themselves swept away by the violence and corruption of Brooklyn's gritty 65th Precinct and its most treacherous criminals.

Will Patton
as Lt. Bill Hobarts

Cle "Bone" Sloan
as 'The Dragon'

Alain Lautre
as Kid With Braids

Alain Lauture
as Kid With Braids

What gives this an extra star is Ethan Hawke: there are plenty of guns blazing in this movie but the real fire comes from his powerhouse performance.

All the actors are excellent in their portrayals of their characters.

Each actor, including Wesley Snipes as a fresh-out-of-jail ex-con, gives one of their grittiest performances in this gripping cop drama reminiscent of 2006's The Departed and 1991's New Jack City.

Watching the dirty badges in this gritty urban tale lose their shine is absolutely riveting.

The drama doesn't just move between the three cops, it prowls between them, occasionally pouncing, and the film builds up quite a bit of tension.

The early morning drinking and pseudo suicide attempts are meant to give us insight into the character but come off as tired images recycled from better movies.

The film is worth a view as a study of just how compelling an actor can be smack dab in the middle of a hyper-violent crime thriller.

Trite. Yet Fuqua, through his trademark violence and his ability to ramp up tension in every scene, ensures that there is always something interesting to watch on screen.

Throughout his career, [Hawke's] broody emotionality has never read as phony so much as sincerely self-aggrandizing. Here, it connects with nothing, reminding us in turn that the film does not connect with its audience.

A messy derivative downbeat cop movie about the mean streets of Brooklyn.

Fuqua once again proves his mastery of the cop/crime drama genre, making for the best of its kind since 'The Departed.'

This hard and realistic thriller follows the fate of three New York cops: one of them has only one week left until retirement, one has been working undercover for years and the third is trying to make a cut to get his growing family out of a moldy house. Their paths only cross marginally, even up until the end, but they all have something in common: they are real human beings with flaws and no shiny heroes. The movie may take the pessimistic look on the job and what it makes out of men a tad too far, but it is still flawlessly acted and gets more exciting by the minute. In the end, only one of them is gonna make the right decision.

I don't know why this was so universally bashed, it's really a great move and in many ways beats out its contemporaries like Crash. The main reason for that is fact that it doesn't have a single overbearing message that it's trying to convey for the entire movie, each character has their own message. I think Antoine Fuqua usually has a great style that he brings to his movies and this is a prime example of it. This often times has a visual style that mirrors each central character's tone, which I thought was pretty cool. Also, just from a visual standpoint Brookyln's Finest is extremely impressive. It reminds me a lot of The French Connection in that it has a realistic element that you can't quite put your finger on, but it's undeniably there. The story lines did a perfect job of intersecting; it wasn't obtrusive or cheesy, but gave you a feeling that this was just a massive city. The depiction of the police and criminals was really interesting; I liked that neither side was labeled as outright heroes or villains. (on a side note, I think it's hilarious that Richard Gere is rescuing hookers again). The core stories depend on individual decisions and morals rather that simple foreshadowing or having a plot that needs to go a certain direction. When the final climax finally hits, it's truly beautiful how everything works out. This is also strengthened by its performances; Richard Gere, Don Cheadle and Ethan Hawke all turn in extremely good performances. All of their characters are conveyed in a way that makes them feel like real people. The acting isn't overblown or drawn out for oscar season. Chances are, if you're willing to give this a chance, it'll probably be a really nice surprise.

If this was finest, God forbid me from seeing its worst. Except for a single scene, the complete movie was boring to the core.

The cops and criminals genre has been done to death, and Hollywood's offerings as of late suggest that they have completely run out of ideas. With the exception of The Town (itself somewhat of a retread of Michael Mann's Heat), I can't even think of a movie from this genre worth mentioning that's come out in the past five years. Brooklyn's Finest is no different. Instead of one cliched narrative, we get three, each connected with the other only through the film's central themes. There's the crooked cop who has had it with the system who he perceives just as corrupt. There's the undercover who's in too deep and it's destroying him mentally. And there's the beat cop who is on the cusp of retiring. He has no intention of making any difference in his profession, and just can't wait until the week is over, but before it is, he may just yet have a chance to do something heroic. The plus side to the film features some strong performances by Ethan Hawke, Don Cheadle, and Richard Gere. Hawke is especially good, because he's essentially playing the Denzel Washington character from Training Day, and he pulls it off well. Interesting, since he played the heroic rookie in that film. Director Antoine Fuqua sets a very serious tone, so much so that the third act feels as epic as a Greek tragedy. The film was shot in an actual slum in Brooklyn, and the slang seemed, at least to me, to reflect the lifestyle and forms of speech in this neighbourhood. But ultimately, no matter how good the visual flair or acting is, it doesn't save the film from feeling predictable. There is nothing that has been said about life in the ghetto, the corruption in the police force, or the personal toll that the job takes on its officers that hasn't been said before. It's extremely hard to engage in a story when we too easily recognize the character archetypes, and the direction the narrative is going to take.