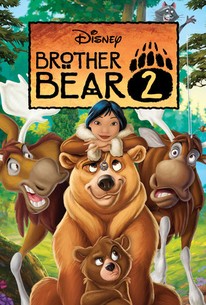 An old friendship is renewed and new bonds are forged as Kenai and Nita set out on the adventure of a lifetime in this animated, direct-to-video sequel to the 2003 Disney hit Brother Bear. When Kenai emerges from his first hibernation with a hearty appetite and a craving for the best spring berries around, he takes his younger brother Koda to Crowberry Ridge for a delicious feast. As Rutt and Tuke scour the landside looking for some female companionship, Kenai is surprised to find his childhood friend Nita venturing into the wilderness with a pressing problem that only Kenai can solve. It appears as if the amulet given to Nita by Kenai has much greater power than either of them had previously thought, and in order to marry, the old friends must travel back to Hokani Falls to burn the amulet together. Now, as the pair travel over icy mountain ranges and down raging rivers, the plan set into motion by the Great Spirits for Nita and Kenai slowly begins to come into focus.

Lionsgate Rounds Up Voice Cast for Alpha and Omega
Critical Consensus: "Because" Is Less Than So-So; "Messengers" Not Screened — Guess The Tomatometer!

It's just a neutral object, with bears.

...comes off as an affable yet entirely needless piece of work...

the return of Dave Thomas and Rick Moranis as the idiot moose is nice, if not a little forced

Sequels are often disappointing, but 'Brother Bear 2' is a keeper, mostly because of its charming story and extraordinary background music.

While not nearly as memorable as its predecessor, Brother Bear 2 has plenty going for it.

...does not quite compare to some of Disney's finest animated work in terms of story or character, but it surely holds its own in terms of artwork and sound design.

The texture and polish is deeply missed, but the characters are so strong and engaging, it still entertains.

Perfectly pleasant entertainment that even improves on the theatrically released original. Overall Rating:60

I dont care if this is a Cartoon Movie. Pure Love mean Sacrifice, Watch it by Yourself!...