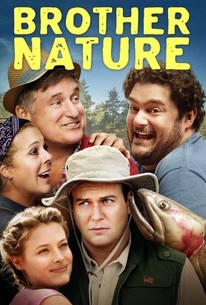 Roger (Taran Killam), a straight-laced politician has big plans to propose to his dream girl (Gillian Jacobs) at her family's lake house. But everything goes awry when he meets his potential brother-in-law Todd (Bobby Moynihan): a full-time camp counselor with a heart of gold and a wild sense of fun, pining to be Roger's best friend, and ultimately catapulting him into a series of unfortunate events. As Roger tries to take a stand amidst outrageous fishing excursions, propulsive water jetpacks and American history-themed musicals, he realizes that being a part of a new family may be more difficult than he'd thought. From Lorne Michaels, the executive producer of Saturday Night Live, comes a hilarious comedy co-starring Rita Wilson, Bill Pullman, Ellen Bloodworth, Sarah Burns, Giancarlo Esposito, Rachael Harris, Kumail Nanjiani, Kenan Thompson and David Wain.

Killam, who recently departed SNL after six seasons, shows a great grasp of his character's escalating bewilderment and frustration.

There's nothing new in the friction between these characters, but it's fun to watch a couple of pros showboating on the field, even when the stakes aren't high.

When the film isn't hilarious, it's usually amusing, always aiming to please in a way few comedies are capable of anymore.

Uninspired and unfunny script and direction are the undoing of this labored farce. And then there's Bobby Moynihan...

I realize that this has absolutely nothing to do with the actual film, but does Taran Killam remind anyone else of a grown-up Will Poulter? And, really, Will Poulter is 23 years old at this stage, so it's not like he's a boy, but I've been seeing him in movies since he was a boy, so it's hard to not think of him that way. Also, Will is only 5 years younger than I am, so it's not like I'm considerably older than him. Anyway, much like I said, that's completely irrelevant to the movie. But, as a whole, this is one of those movies that seemed like it was more fun to shoot than it is to actually watch. I seem to say this a lot in these reviews, but I'm not even close to suggesting that this is a bad movie, on the contrary, it's a decent little diversion. While I didn't think What About Bob was a masterpiece, I felt Richard Dreyfuss' manic performance when he finally loses his shit and tries to kill Bob for ruining everything in his life was genius. And, really, a lot of this movie reminds me of What About Bob on a smaller scale. Todd, Roger's future brother-in-law, annoys the living shit out of Roger during the entire week Roger is with his girlfriend spending time with her family at their lake house. Roger grows is increasingly angered by Todd's hi-jinks until he reaches a boiling point where he just blows up. You've seen this movie before and will, probably, see it again. If you've seen more than 10 episodes of Family Matters, after Steve Urkel is introduced, then you know exactly what you're in for. The specifics might be different, but Todd is really just a variation of that very annoying character that everyone else BUT our lead character loves. It's one of those predictable plots that you can get a lot out of as it relates to broad comedy. And this movie is absolutely no different. The silliness that Todd and Roger get into are, realistically speaking, standard sitcom fare. Really, there's not much separating this from an episode of a sitcom like Family Matters or, even, What About Bob. I did like the cast however. Taran Killam is really good as the straight man to Bobby Moynihan's loudness and his antics. But, really, and I realize this isn't a fair comparison, but there's no better straight man than Jason Bateman. Those of you who have seen his work in Arrested Development can attest to that. Though, of course, I'm not trying to take anything away from Taran Killam and his good performance here. And then there's Bobby Moynihan. Overall, I think he's good in this movie as well, but I also get to see Roger's side of things in that Todd, at least for a decent percentage of the movie, comes across as more annoying than a lovable loser. The scenes where Todd tones it down and you get to see more of the type of person he is really do help a bit. There's obviously not much of that here, but I think those scenes are necessary to keep you from absolutely coming to hate Todd. Because the movie is really more about Roger losing his mind and that story is easier to tell if Roger comes across as the irrational one in the equation. The supporting cast is strong and, once again, Kumail Nanjiani is the highlight of the movie. He's been the comedic highlight in the last three movies I've seen him in, including this one. Sadly, though, none of those movies were what I would call good, so that's a shame, but Kumail remains a supremely entertaining and talented comedic actor, I just wish he could be in better movies. Here's to hoping. But, I digress, I can't really complain about the casting in this movie, that's the least of my worries. My worries should be the inconsistent nature of its comedy and not giving the cast something really meaty to sink their teeth into, at least as far as this type of flick is concerned. As a whole, it certainly has its flaws, but its heart is in the right place. Some solid comedic performances elevate this material, even if it falls short of being good. If you've got a free Redbox rental then give this a shot. It won't be amazing or anything of the sort, but you might get some enjoyment out of it where I didn't. Decent comedy at best.