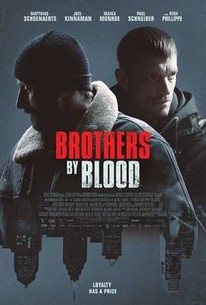 Critics Consensus: Measured to the point of monotony, Brothers by Blood explores the generational impact of grief and violence in disappointingly tedious fashion.

Critics Consensus: Measured to the point of monotony, Brothers by Blood explores the generational impact of grief and violence in disappointingly tedious fashion.

Critic Consensus: Measured to the point of monotony, Brothers by Blood explores the generational impact of grief and violence in disappointingly tedious fashion.

In the City of Brotherly Love, eight-year-old Peter Flood helplessly watches on as his little sister is killed by a neighbor's reckless driving. Tormented with grief and resentment, his father finds revenge as the only solution, leaving lasting generational wounds. Thirty years later, Peter still wrestles with the guilt he feels over his sister's death and his father's vengeance. As he tries to distance himself from the criminal family business, his cousin, Michael, becomes more powerful in the hierarchy. Bonded by blood, neither man can escape violence as they are dragged further into a chilling cycle of betrayal and retribution.

Donald Trump
as Self
View All

Critic Reviews for Brothers By Blood

A wasted effort, and I hate to do this to a film...a lot of time and talent went into this, but it just doesn't work.

A waiting game in which both the audience and the movie lose.

Casual viewers, unwilling to sit through 90 minutes that feel like three hours, won't find much interest in such a somber, slow-burn approach...

It feels rather plodding... failing to turn the boxer's conflicting loyalties into the stuff of crime-flick high drama.

Director Jérémie Guez paints his Philadelphia-set gangster tale with authentic-enough colors, but he fails to find a convincing reason to tell this story, of these Philadelphia gangsters, at this time.

It's hard to say that any other edit would be better, because Brothers by Blood is one single, grey mass to the bone, an unfortunate use of a sterling cast and a book that deserves a more textured retelling.

Brothers by Blood starts off with plenty of promise then devolves into a rather dull film.

Visually drab, tonally flat, and with precious few sympathetic or relatable characters, Brothers by Blood should be elevated by its strong cast but remains steadfastly sluggish.

Less a nuanced examination of small-time underworld behavior in the city of Brotherly Love and more a collection of lame tough-guy behaviors and dialogue...

Brothers by Blood is about the traits we inherit from our parents, our loyalties and debts, and the difference between the two. Beneath it all, a sad lyricism permeates the proceedings.

Brothers by Blood is essentially a cheap wannabe Martin Scorsese gangster film ... Like a lot of derivative mobster flicks, Brothers by Blood limits the female characters in very sexist and shallow ways.

Gritty but engagingly introspective, this dark drama centres on a group of growly men whose lives are entwined with organised crime.

Rich Cline
Shadows on the Wall
View All Critic Reviews (30)

There are no featured reviews for Brothers By Blood at this time.