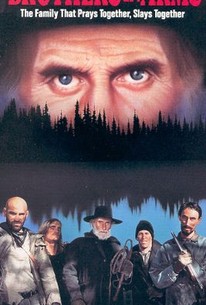 Not bad as far as slasher movies go, Brothers in Arms is set-inevitably-in a remote backwoods community. The title refers to a pair of siblings who don't get along (that's putting it mildly). When the brothers inadvertently venture into looney-land, they are besieged by a religious cult which dotes on ritual murders. Forced to work together, our heroes struggle manfully to avoid being chopped, lopped, sliced and diced. Dedee Pfeiffer, Michelle's sister, shows up in a role that might surprise her Cybill fans. Brothers in Arms is more than a little inspired by Deliverance, with elements of The Most Dangerous Game tossed in for good measure.

There are no critic reviews yet for Brothers in Arms. Keep checking Rotten Tomatoes for updates!

There are no featured reviews for Brothers in Arms at this time.