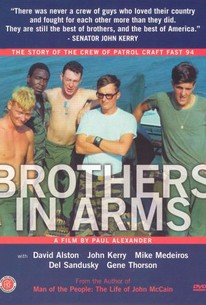 In 1969, during the Vietnam War, Senator John Kerry was one of a handful of soldiers assigned to a "Swift boat," a small reconnaissance vessel that patrolled the rivers in search of North Vietnamese camps hidden in the thick jungles along the banks. Like most of the Swift boat crews, Kerry's company came under attack several times during its hitch in Vietnam, and the horrors of combat and the emotional weight of the war's legacy proved to be a great obstacle to overcome for these soldiers. Brothers in Arms is a documentary that profiles the men who served in the Swift boat crew -- Kerry is included, but not given particular emphasis -- and discuss in detail their experiences in Vietnam, the difficulties they encountered after returning home, and how they each came to terms with their traumas and moved on. Directed by Paul Alexander, Brothers in Arms was one of two films about John Kerry's Vietnam experiences scheduled to be released in the fall of 2004, as he was in the midst of a campaign for president.

Alexander, a political writer and radio host, gets riveting, emotional confessionals from the veterans.

A respectfully modest effort that allows Kerry and his Swift boat comrades to tell their stories in their own voices.

As for the candidate, like Tony Wilson in 24 Hour Party People, he's wisely content to remain a supporting character in his own life story.

Will this film do Kerry any good, or the Swifties any harm? My bet is: Not a bit, one way or the other.

The talking heads format just doesn't make for compelling film, despite its timeliness.

The documentary is well edited, well paced, and feels genuine. It's educational, important and enjoyable independent of the Kerry campaign.

Tellingly, [John] Kerry is a much more compelling speaker during a 1970s protest rally than in the contemporary footage, where he carefully chooses his words.

The movie's main contribution is its fresh look at the Vietnam War, being refought in the Kerry-Bush presidential campaign at the time of the film's release.

The four men offer powerful eyewitness testimony against the subsequent charges that Kerry didn't deserve his Silver Star for courage and his three Purple Hearts.

There are no featured reviews for Brothers in Arms at this time.