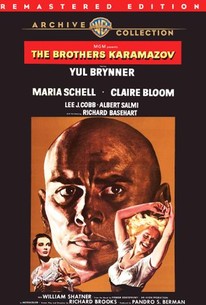 Dostoyevsky's novel The Brothers Karamazov is given a Hollywood screen treatment by producer Pandro S. Berman and director Richard Brooks. Yul Brynner plays Dmitri Karamazov, a callous Russian officer who cuckolds his domineering father (Lee J. Cobb) with the old man's mistress Grushenka (Maria Schell). Richard Basehart is Dmitri's intellectual brother Ivan, while William Shatner is the pious Alexey Karamazov; both men eventually enjoy the attentions of the willing Grushenka. The Karamazovs' half-brother is Smedyakov (Albert Salmi), an epileptic whose purpose in the story is clarified after the family patriarch's murder. It is now part of Hollywood folklore that Marilyn Monroe fought long and hard to be cast as the enigmatic Grushenka.

Critic Reviews for The Brothers Karamazov

Bold handling of crude unbridled passion, of violently conflicting ideas, and of earthy humor makes up The Brothers Karamazov.

Very uncertain in period and atmosphere, and saddled with some terrible performances.

Conspicuous assets are the striking color photography and the musical score, both of which help a great deal in enhancing the drama's savage and soulful moods.

While not as terrible as his subsequent adaptation of Lord Jim, this 1958 Hollywoodization of the Dostoyevsky novel by writer-director Richard Brooks is pretty grotesque all the same.

In spite of all the virtues cited above, one leaves the film with a sense of disappointment. Part of this is due to the shortcomings of the script.

I would avoid this film as readily as one avoids Siberia.

The film feels like 'Classics Comics' instead of a classic.

When the acting's good, it's very good, but when it's bad, it's laughable and director Brooks' attempts at injecting Slavic intensity misfire badly sometimes.

Audience Reviews for The Brothers Karamazov

There are no featured audience reviews yet. Click the link below to see what others say about The Brothers Karamazov!