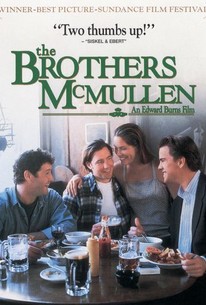 Shot on weekends over an eight-month period with practically no budget, writer/director/producer/actor Edward Burns' first feature is a family drama centering on the tumultuous love lives of three small-town, Irish-American brothers. Burns stars as Barry, the middle child who finds himself needing a place to stay and moves in with big brother Jack (Jack Mulcahy). Despite being seemingly happily married to Molly (Connie Britton), Jack gives in to temptation and begins having a sexual affair. All the while, devout-Catholic baby brother Patrick (Mike McGlone) faces an ongoing struggle to deal with the religious leanings of the women in his life. The Brothers McMullen premiered at the 1995 Sundance Film Festival, where it was at the center of a fierce bidding war.

Peter Johansen
as Marty
View All

Critic Reviews for The Brothers McMullen

This is not a "religious" film, and the brothers are far from saints. But they know right and wrong, and in their imperfect ways they are struggling to attain a state of grace. Sometimes they slip. Sometimes they don't struggle so hard. Life's like that.

The acting and scripting are too uneven for either the drama or the comedy to gather much steam.

It's easy to see what attracted Redford to Burns' first film. Burns' dialogue is natural and witty. Burns films with the gritty immediacy of a documentary, slipping a boom mic above backyard conversations over beers.

It's the sprightly profane dialogue, the dirty talk of the brothers about love and religion, that gives this otherwise old-fashioned comedy (imitative of Woody Allen) a modern feel and winsome drive, keeping it from getting stale.

A good Movie of the Week. Engaging, a bit soapy, but with real circumstance & intelligent/plausable chat. However, tidies up too neatly in the end.

Not just horrid by itself, this opened the floodgates for all those self-absorbed indie "relationship" comedies of the latter 1990s.

Audience Reviews for The Brothers McMullen

A great writing debut for Burns. Nice dialogue. The banana scene is definitley memorable, bookbat. I wonder if the older folks get, the more sobering this movie might become. I'd love to see more from Jennifer Jostyn and Maxine Bahns.