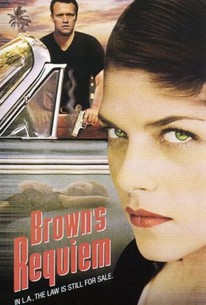 Based on a novel by acclaimed crime writer James Ellroy, this film stars Michael Rooker as Fritz Brown, a former L.A.P.D. detective who was kicked off the force due to his drinking. Now struggling to remain sober, Brown works as a private eye when he can, but he makes most of his money repossessing cars. One day, Brown is offered some detective work by Freddie "Fat Dog" Baker (William Sasso), a golf caddy who has some severe reservations about his younger sister, Jane (Selma Blair) and her relationship with Solly (Harold Gould), a wealthy businessman with mob connections who is old enough to be Jane's grandfather. Brown isn't interested at first, but when "Fat Dog" starts flashing an impressive bankroll, he decides to take the case. Brown's investigation of Solly causes him to cross paths with Cathcart (Brion James), the head of L.A.P.D. internal affairs who was responsible for Brown losing his job. Soon Brown runs afoul of a group of hired thugs and several key figures wind up dead as Brown tries to find out the truth about Solly and Jane. Ellroy wrote Brown's Requiem, his first novel, while he was still supporting himself as a golf caddy and breaking himself of a decade-long addiction to drugs and alcohol.

Tobin Bell
as Stan The Man

Will Sasso
as Freddy

Boilerplate noir all the way, from the femme fatale to the hard-boiled voiceover.

Its funeral tone left me with a hang-over.

There are no featured audience reviews yet. Click the link below to see what others say about Brown's Requiem!