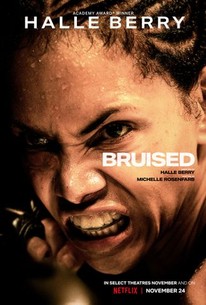 Critics Consensus: Bruised isn't as hard-hitting as its title might suggest, but Halle Berry impresses on either side of the camera in her directorial debut.

Critics Consensus: Bruised isn't as hard-hitting as its title might suggest, but Halle Berry impresses on either side of the camera in her directorial debut.

Critic Consensus: Bruised isn't as hard-hitting as its title might suggest, but Halle Berry impresses on either side of the camera in her directorial debut.

Jackie Justice (Halle Berry) is a mixed martial arts fighter who leaves the sport in disgrace. Down on her luck and simmering with rage and regret years after her fight, she's coaxed into a brutal underground fight by her manager and boyfriend Desi (Adan Canto) and grabs the attention of a fight league promoter (Shamier Anderson) who promises Jackie a life back in the octagon. But the road to redemption becomes unexpectedly personal when Manny (Danny Boyd, Jr.) -- the son she gave up as an infant -- shows up at her doorstep. BRUISED marks the directorial debut of Academy Award winner Halle Berry and also stars Adriane Lenox, Sheila Atim, Valentina Shevchenko, and Stephen McKinley Henderson in a triumphant story of a fighter who reclaims her power, in and out of the ring, when everyone has counted her out.

Halle Berry shows real filmmaking talent, but there's too much going on throughout the movie, when the story demands a more consistently minimalist treatment.

Kick butt, break rules, and direct your first feature after 50? Maybe Berry could be the next Bond.

The end is fairly predictable. The way it gets there is decidedly not.

Berry's skills behind the camera are a work in progress. In front of the lens, she is a virtuoso.

A film that uses the predictable beats of a fighter's comeback to create a showcase for hard-hitting performances.

I hate to say this, but it feels like a real vanity project from [Halle Berry].

But despite its best intentions, the movie ends up a recycled and regurgitated version of many other movies in the same genre, only without the same impact.

A script that loses in a unanimous decision to all the cliches and a heavy-handed story it dishes out.

Pacing and some character development keep BRUISED from being a knockout, but it has such strong performances that it's never down for the count.

Valerie Kalfrin
Their Own League

When it comes to sports dramas, they can sometimes be quite predictable and, unfortunately, become cliché. Bruised tends to fall within said trope. However, watch it for the performances.

Halle Berry directed and stars in this brutal film that also features an outstanding performance by young Danny Boyd, Jr.

Halle Berry K.O's in her directorial debut as an emotionally, physically abused UFC fighter desperately trying to win back her career and respect from the only person who loved her unconditionally - her son.

There are no featured reviews for Bruised at this time.