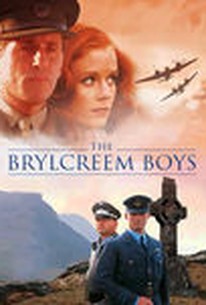 Many may not know that Ireland maintained its neutrality during World War II, so that any soldiers from that conflict who found themselves on Irish soil had to be kept in captivity until the war's end. For a variety of aeronautical reasons, quite a few Axis and Allied pilots found themselves having to bail out over Ireland. In this film, captives Miles Keogh (Bill Campbell), a Canadian pilot, and Count Rudolph von Stegenbek (Angus Macfadyen), a German pilot, are rivals for the affections of Mattie Guerin (Jean Butler), a local Irish girl. How this rivalry continues is just part of the story of this exciting and romantic film. ~ Clarke Fountain, Rovi

Chris 'Kit' Ryan
as Boy at the races

James Tiernan Ryan
as Boy at the races

Critic Reviews for The Brylcreem Boys

There are no critic reviews yet for The Brylcreem Boys. Keep checking Rotten Tomatoes for updates!

There are no featured reviews for The Brylcreem Boys at this time.