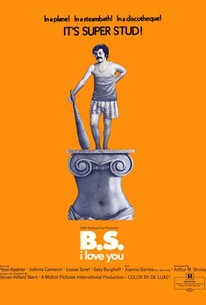 Any time someone tells you that the decade of the 1970s was any kind of cinematic Golden Age, refer them to such time-wasters as B.S. I Love You. Peter Kastner plays a New York adman who tries to get ahead by seducing his boss Joanna Barnes. Meanwhile, he's sleeping with 18-year-old JoAnne Cameron, who turns out to be Barnes' daughter. But there's another woman in the case: Kastner's Connecticut girlfriend Louise Sorel, whom he rescues Graduate-style from her own wedding. A more succinct description of this film can be found in the first two initials of the title.

Richard B. Shull
as Harris

Barry Woloski
as Hippie
View All

Critic Reviews for B.S. I Love You

If you like Madison Avenue jokes (I tend to) it has a few good ones. That's all.

There are no featured reviews for B.S. I Love You at this time.

B.S. I Love You Quotes