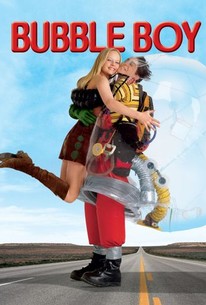 Critics Consensus: Bubble Boy bounces along with lame, offensive jokes that are more tasteless than funny.

Critics Consensus: Bubble Boy bounces along with lame, offensive jokes that are more tasteless than funny.

Critic Consensus: Bubble Boy bounces along with lame, offensive jokes that are more tasteless than funny.

Jake Gyllenhaal, the young star of the critically well-received October Sky (1999), follows up that film with this offbeat comedy. Gyllenhaal stars as Jimmy Livingston, a teenager with an immune system deficiency who has spent his entire life living in a plastic bubble under the doting, overprotective care of his mother (Swoosie Kurtz). Jimmy is in love with his next-door neighbor Chloe (Marley Shelton), so when he learns that she has left for Niagara Falls in order to be married, he's devastated. He quickly assembles a portable "bubble suit" and sets out on a 2,755.8-mile odyssey in order to stop her and proclaim his affection. Along the way, Jimmy experiences a number of adventures, including encounters with freaks, bikers, rock stars, and a cult. Bubble Boy is a comic riff on the classic TV movie The Boy in the Plastic Bubble (1976), which starred a young John Travolta.

Ever Carradine
as Mark's Sister

Oliver A. Kindred
as Neighborhood Boy

"X-Men," "The Fountain" Added To Cannes Line-Up
‘Dust in the Wind’…"Old School’s" Patrick Cranshaw Passes Away

Hayes shows a deft touch with both cartoony slapstick and character-based comedy and manages to create moments of real poignancy in between.

The road trip aspect of Bubble Boy provides fodder for most of the jokes, which are requisitely crude and tactless and only occasionally amusing.

Seldom has a more misguided movie escaped from a major studio than Touchstone's Bubble Boy.

This amazingly tasteless, gross-out comedy is full of cruel jokes, stupid characters, schmaltzy sentimentality and situations that make no sense.

Hollywood monstrosities all, and boy are they scary!

After enduring only a few minutes of this shrill debacle, you'll feel more trapped in the theater than Jimmy is by his bubble.

A fun and oddly entertaining twist on the road trip film.

The film is only sporadically funny, and it's frequently in poor taste, but it's got energy to spare, and Gyllenhaal's performance gives it a soul.

...the most anti-human movie to surface since Showgirls.

A silly, not very funny, and forgetable film. Rotten.

Life is an adventure. Don't blow it. Cool good movie! This movie was as good as it was funny, perfect balance. It's kinda short but it's enough to be a blast. The story is very good and fun and you can't help but laugh at the different parts of Bubble Boy's journey. Great family film. On his way to save his love from marrying the wrong man, BB (Bubble Boy) encounters adventures very rare for a young man in a bubble whose system could not tolerate even one germ: . A bus load of cult members who boot him out of their bus when he accuses them of being a cult. . A motorcyclist ex boy friend of his mother (who is in hot pursuit) who gives him a ride. . Joins a band of freaks on a train who he saves from a vicious dwarf. . An East Indian ice cream vendor who gives him a ride until an unfortunate encounter with a cow. . Mud wrestles scantily clad beauties in order to win $ 500.00 to pay Pappy, an older person, to take him to Niagra Falls in his jalopy. BB gets a lift in an air plane (piloted by Pappy's brother, Pippy) and bails out over Niagra Falls, goes over the falls, and races to the church just in time to stop the marriage ceremony and marry his one true love after finding out his mother deceived him about his condition.

Jake Gyllenhaal as a comedic superstar. This is a really funny movie, but it's also got a really good message about living life and taking risks. While it's sort've a spoof of Boy in the Plastic Bubble, it's very much its own movie with a slightly similar concept. The nutjob characters are great, especially the freakshow carnies with mutant powers. The love story is really cute and somehow it never crosses into cheesefest territory. Actually the whole movie is always funny, but never takes anything too far which is really nice.

I think this comedy film is awesome with a delightfully goofy plot. The entire cast gives hilarious performances from Swoosie Kurtz in an outrageous psycho-mother performance. Jake Gyllenhaal is very funny as the wide-eyed innocent goes on the adventurous journey with the bubble. He's a bit like Dustin Hoffman in The Graduate at the final to stop his best friend's marriage. But I see the worst scene is the parents of the Bubble Boy threw the dwarf Dr. Phreak (played by Verne Troyer) with a baby seat out of their truck because I could see that isn't a real person, it's a dummy. WORST MISTAKE!