Buck and the Preacher1972 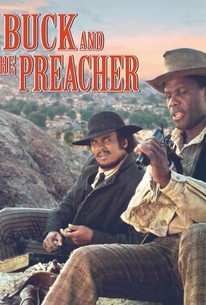 Buck and the Preacher Photos

At the end of the Civil War, African-American ex-soldier Buck is looking for places in the West where former slaves can settle. But an unprincipled man named Deshay is working with his ruthless gang of outlaws to try to stop Buck's work and keep the people working as slaves in Louisiana. When Buck meets a con man in disguise who is calling himself the Preacher, the two men band together to stop Deshay and his gang.

Bobby Johnson
as Man Who Is Shot

Critic Reviews for Buck and the Preacher

A movie the entire family can enjoy.

Little more than a string of shop-worn sagebrush sausages.

Audience Reviews for Buck and the Preacher

For reasons I don't feel like listing, I think it's fair enough to say that, while this COULD be called a blaxploitation film, it's not really necessary to. I see it as just a decent western, Set in the Kansas Territory in the late 1860s, this was Sidney Poitier's directorial debut, and he also stars as Buck- an ex-Union army soldier scouting out locations for former slaves who want to settle out West. He reluctantly teams up with a Preacher (Harry Belafonte) who is actually a con man, to fight off the villainous DeShay, an ex-Confederate soldier trying to force the former slaves back into a life of servitude in Louisiana. It's a pretty straight forward tale, but it score points for being revisionist, and not completely in a wish fulfillment way. It's reasonably well paced, there's some decent action, and I enjoyed the concept. The music was okay, but could have been better. Poitier is fine, and it's good seeing him branch out from his more dignified roles. Belafonte is an absolute delight, and I like Ruby Dee as Buck's wife as well. The film could have done a little more in terms of development, but we get just enough to keep things from being totally pointless. Give this one a look. It's not the best, but it's pretty decent, and worthy of more attention.

Buck and the Preacher Quotes