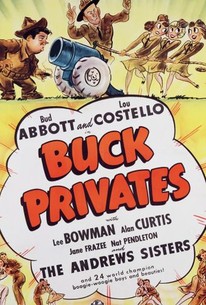 Accidentally enlisting in the United States Army, Slicker and Herbie cause a ruckus in boot camp while two privates compete for the attention of an attractive hostess. Abbot and Costello star with performances by Lee Bowman, Alan Curtis, Jane Frazee and others. This war-time comedy was nominated for an Academy Award for Best Score, which included numbers by The Andrews Sisters--one being the ever-popular "Boogie Woogie Bugle Boy from Company B."

Patty Andrews
as Herself

Laverne Andrews
as Herself

Maxene Andrews
as Herself
View All

This funny comedy, one of the most popular pictures of 1941, established Abbott and Costello as commercial comedic duo for a decade.

More an assembly of funny sketches, Buck Privates still plays very funny without much of a story behind it.

Buck Privates was the first of three movies starring Abbott and Costello and the Andrews Sisters, although Bud and Lou had one other film before. Hollywood wisely realized that Abbott and Costello couldn't carry a film on their own at this point and gave their movies regular stars and a regular plot, to which they would add their own comedy bits to. You could probably cut Abbott and Costello completely out of Buck Privates and it wouldn't affect the plot one little bit. They do their comedy bits sort of in a vaccuum apart from the rest of the film. The Andrews Sisters do a couple of songs in the movie, most noteably "You're a lucky fellow Mr. Smith" and "The Boogie Woogie Bugle Boy". The Andrews Sisters, for those who don't know, were an amazingly talented singing group. Three sisters who sang airtight harmony that was quick, fluid and flawless (I remember being a little pre-schooler and begging my grandmother to play the single of "Boogie Woogie Bugle Boy" for me every time she wanted me to take a nap- I'd lay there listening to that song over and over again on that old record player, digesting the music like it was the stuff of dreams). Anyway, besides the Abbott and Costello bits, there's also the main storyline, which involves a bit of class warfare between the rich inductee and his former butler-turned-equal-private. The rich soldier and the poor soldier butt heads over nearly everything, especially the hot girl who is apparently in the army as some sort of concubine or something. Can the soldiers overcome their differences and work together to defeat Hitler? Slow down, this isn't that kind of movie. Actually, it came out before WWII officially began, but there are undertones of the anticipation of war. As hard as they might try, nobody's fooled about the inevitable breakout of war. Still, this is pretty light-hearted fare. Entertaining, though.