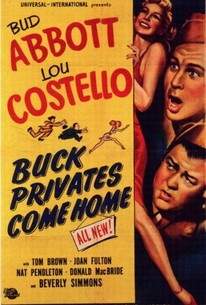 After serving with a notable lack of distinction in WW2, Corporal Slicker Smith (Bud Abbott) and Private Herbie Brown (Lou Costello) return to the US. Unbeknownst to their sourpussed sergeant Collins (Nat Pendleton), Slicker and Herbie have smuggled cute little war orphan Evie (Beverly Simmons) past the immigration authorities. In their efforts to find a decent home for Evie, our heroes return to the prewar "jobs" as sidewalk salesmen, then make a disastrous attempt to collect their GI bonus money. They also struggle to save Evie from deportation, hiding her from the prying eyes of the ubiquitous Collins, who has likewise returned to his civilian job as a police officer. The climax finds Herbie participating in a big-money midget-car race, feverishly dodging pedestrians and motorists as he tries to escape the authorities. The film also includes a romantic subplot involving Tom Brown and Joan Fulton (later known as Joan Shawlee).

Well, it makes you laugh.

The feature culminates in an elaborate automobile race.

Good representation of what made Abbott and Costello comedy superstars of their day.

This comedy is pretty average for 1947, actually it's pretty corny, and not that funny. Overall, it's okay, not good but not too bad either.