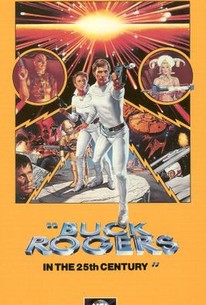 Gil Gerard plays Buck Rogers, an American astronaut who awakens after 500 years in space to find a Draconian princess scheming to take over planet Earth. Of course, he is mistaken for a spy and must not only save himself but the galaxy as well. This sci-fi feature was intended as a pilot for the television series.

Critic Reviews for Buck Rogers in the 25th Century

The best thing about the film is that neither director Daniel Haller nor his actors take themselves seriously, and the result is one of the more pleasant ways to spend some time.

Frank Beascoechea's Technicolor photography is perfectly slick and glossy, and the film has been edited to an ideal 89 minutes by John J. Dumas.

The only redeeming facet in the whole sappy adventure, is Erin Gray's schoolboy fantasy Wilma Deering... But even here the script is too coy and childish to allow sex appeal to reach the stars.

Is to movie-going what corn flakes are to eating. Just to anticipate it is to know everything about it.

The character is again a lackluster after-thought...

Too much time is wasted with stale Star Wars plagiarisms, including the screen's dullest robot.

If nothing else, this silly adventure yarn has the distinction of containing the worst robot in movie or TV history.

A curious B-movie that is entertaining at times. [Full Review in Spanish]

On the little screen, the eye is not discerning enough to see the obvious miniatures and shoddy special effects. It's all magnified by the big screen, as are the comic-strip lines put into the mouths of the wooden actors.

Audience Reviews for Buck Rogers in the 25th Century

A pretty good time travel story, but it can be a bit annoying in scenes. Overall, I liked it it's cute.

As camp as the future can get but the tv show held me spellbound for years. mThe movie was just as good.

I was wowed by the theatrical experience of "Buck Rogers in the 25th Century" - almost as powerful as Star Wars for us kids! Having those sexy chicks laying around on the Buck Rogers letters during the title sequence was as sleek and attractive as a James Bond intro - gosh I loved it. It had everything Star Wars had, even though Buck was a bit of a clown, and things were set around Earth instead of some other Galaxy, making it less interesting. I thought Twiki and Dr. Theo were the cutest little robots since R2-D2 and C-3P0. I loved the disco dance party on Princess Ardala's ship - too cool! The visit to the destroyed Chicago and mutant attack was neat stuff too. The end battle was cheapo compared to the Death Star battle; we were a bit let down by that. I was overjoyed when I heard they were going to be making a TV series out of it. It's all a bit boring these days, but I'll never forget my first wowed impressions.