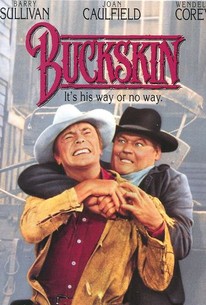 Chaddock (Barry Sullivan) is the straight-shooting marshall of Gloryhole, Montana. Wealthy rancher Rep Marlowe (Wendell Corey) practically owns the town by way of his gambling saloons, shady land deals and hired guns who intimidate the law-abiding citizens. Sheriff Tangley (Lon Chaney Jr.) calls on Chaddock when Marlowe holds the town hostage by damming the river and cutting off the water supply. Barbara Hale plays Sarah Cody, whose young son is killed by gunfire in the ensuing melee. The saloon girl Nora (Joan Caulfield) is a former schoolteacher forced into her tawdry occupation by the menacing Marlowe in this routine western film. ~ Dan Pavlides, Rovi

There are no critic reviews yet for Buckskin. Keep checking Rotten Tomatoes for updates!

There are no featured reviews for Buckskin at this time.