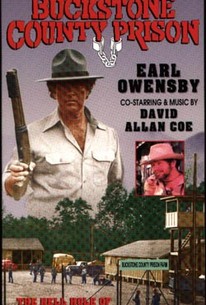 North Carolina filmmaker Earl Owensby assembled this tense tale of hatred and bigotry. Originally titled Seabo, the film stars Owensby himself as a half-breed Indian. Subjected to endless persecution, Seabo (Owensby) reacts with violence, only to end up on a hellish chain gang. When he learns that the goonish warden is planning a wholesale slaughter of the prisoners, Seabo masterminds an escape. Most of the cast is comprised of local unknowns, with the exceptions of oldtime western stars Donald "Red" Barry and Sunset Carson. Seabo didn't get much play north of the Mason-Dixon line until it was retitled Buckstone County Prison and telecast on the HBO cable service in January of 1981.

There are no critic reviews yet for Buckstone County Prison. Keep checking Rotten Tomatoes for updates!

There are no featured reviews for Buckstone County Prison at this time.