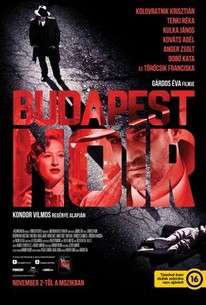 Director Eva Gardos revisits film noir classics such as Chinatown in this stylish reimagining of Budapest in 1936, shortly before Hungary turned fascist. Investigating the mysterious death of a Jewish woman, charismatic reporter Zsigmond dives into the capital's underworld. In its brothels and boxing rings and amidst corrupted politicians and gangsters, he finds a city on the verge of eruption. A stunning glimpse into Hungarian urban life on the eve of the Second World War and a beautiful homage to the golden era of cinema. +Short: 100 Faces, Winner of 2018.

Some period films come across as homages to classics of the past, while others play perilously on the edge of imitation. "Budapest Noir" definitely falls in the latter category...

There are no featured reviews for Budapest Noir at this time.